Elements can have isotopes (atoms of the same element, with a different number of neutrons). The atomic mass of an element in the periodic table is an average of all the naturally occurring isotopes for the element. The average value is based on both the mass of all isotopes and their natural abundance.

There are four stages to a mass spectrometer.

In order to move an atom or make it behave in a certain way, the atom needs to become charged. A neutral atom (in a gaseous state) is ionised and becomes a positive ion. A high energy beam of electrons is used to ‘knock’ an electron out of the atom.

The charged ion needs to move through the mass spectrometer at a certain speed, so it is accelerated using a magnetic field. Having all ions move at the same speed is important as it enables a comparison of their behaviour to be made with deflection.

The whole idea behind mass spectrometry is that heavier ions will be harder to ‘bend’ (deflect) around a corner than lighter ions. 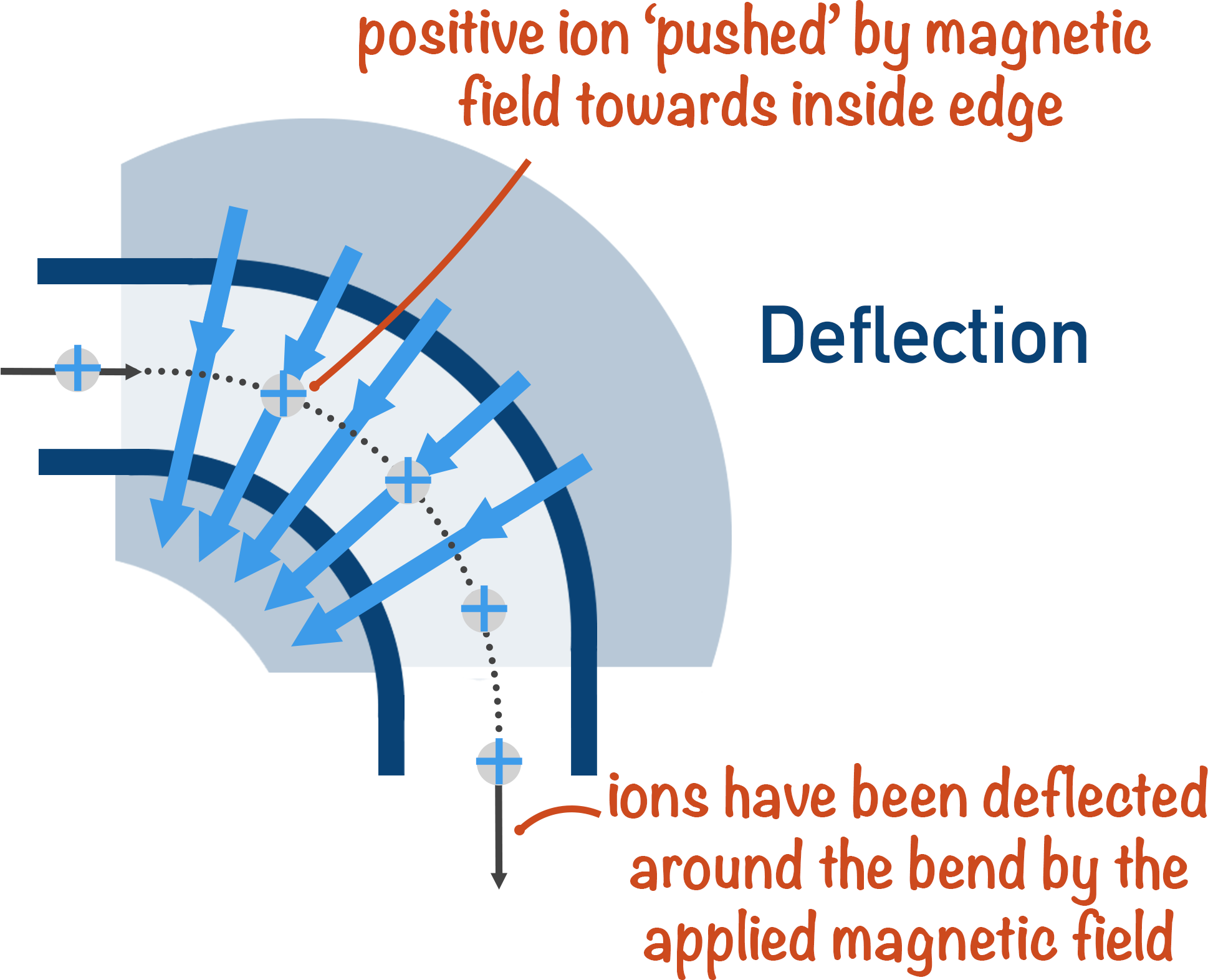 Light particles are very easily blown; they take a very small force of air (magnetic field!) to move around the corner perfectly.

Heavier particles require a much greater force of air (magnetic field!) to be ‘bent’ around the corner. 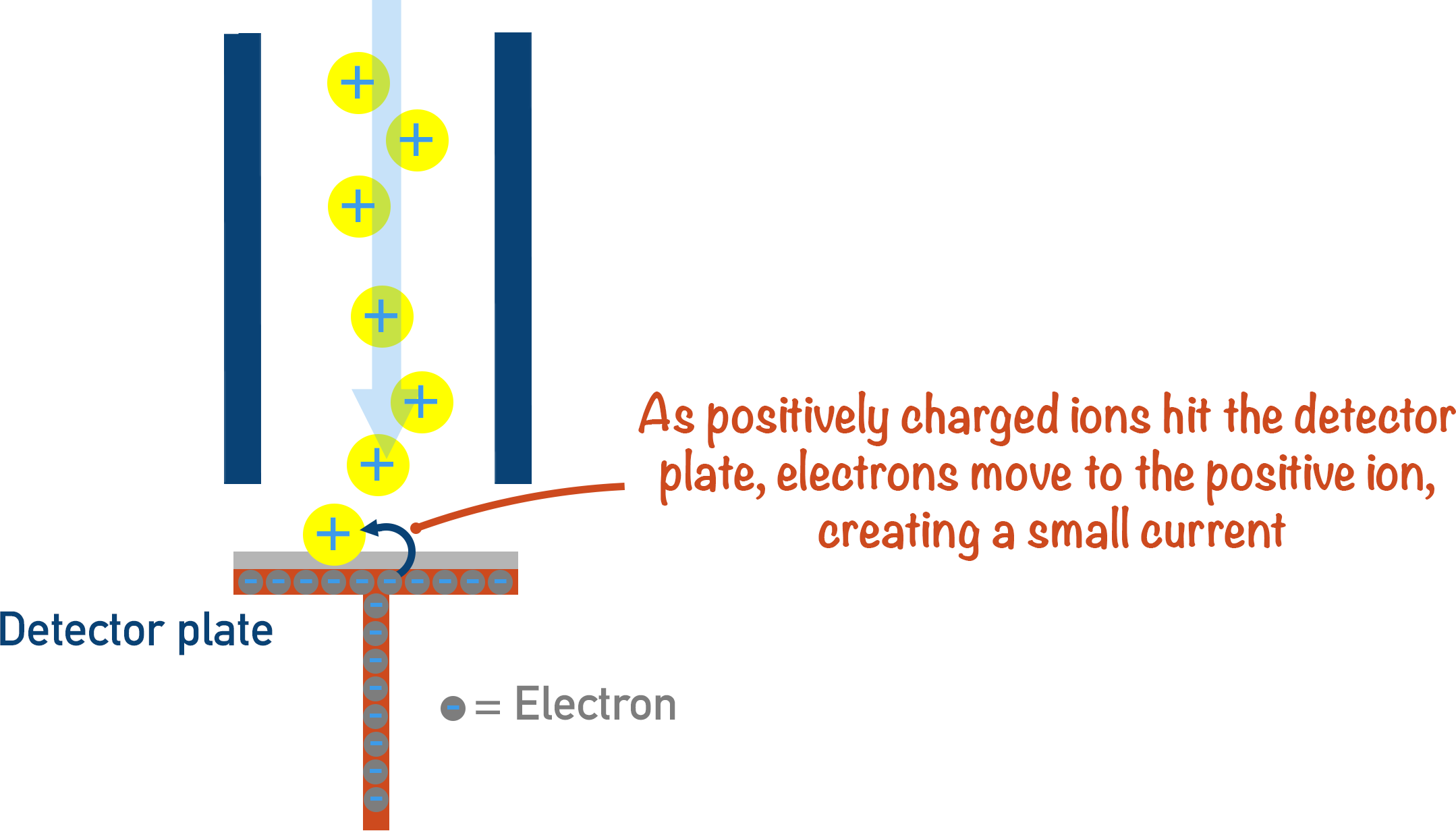 The positive ion hits the detector, gains an electron and leaves to make the ion neutral; a signal is sent to a computer every time this happens. The more electrons that leave the detector plate, the more ions there are hitting the detector – giving a stronger signal.

The important thing to remember with mass spectrometry is that the strength of the magnetic field in deflection is constantly changing or ‘sweeping’. This means it will start at a low strength and progressively move up to a higher strength, with the detector detecting ions that hit the detector plate at a given strength of magnetic field. This gives us a graph of results called a ‘spectra’.

If a molecule of a substance contains 2H or 13C (naturally occurring heavier isotopes of carbon and hydrogen), the molecule will have a relative mass that is one heavier than other molecules of the same substance. This is seen on mass spectra as a ‘M + 1’ peak. 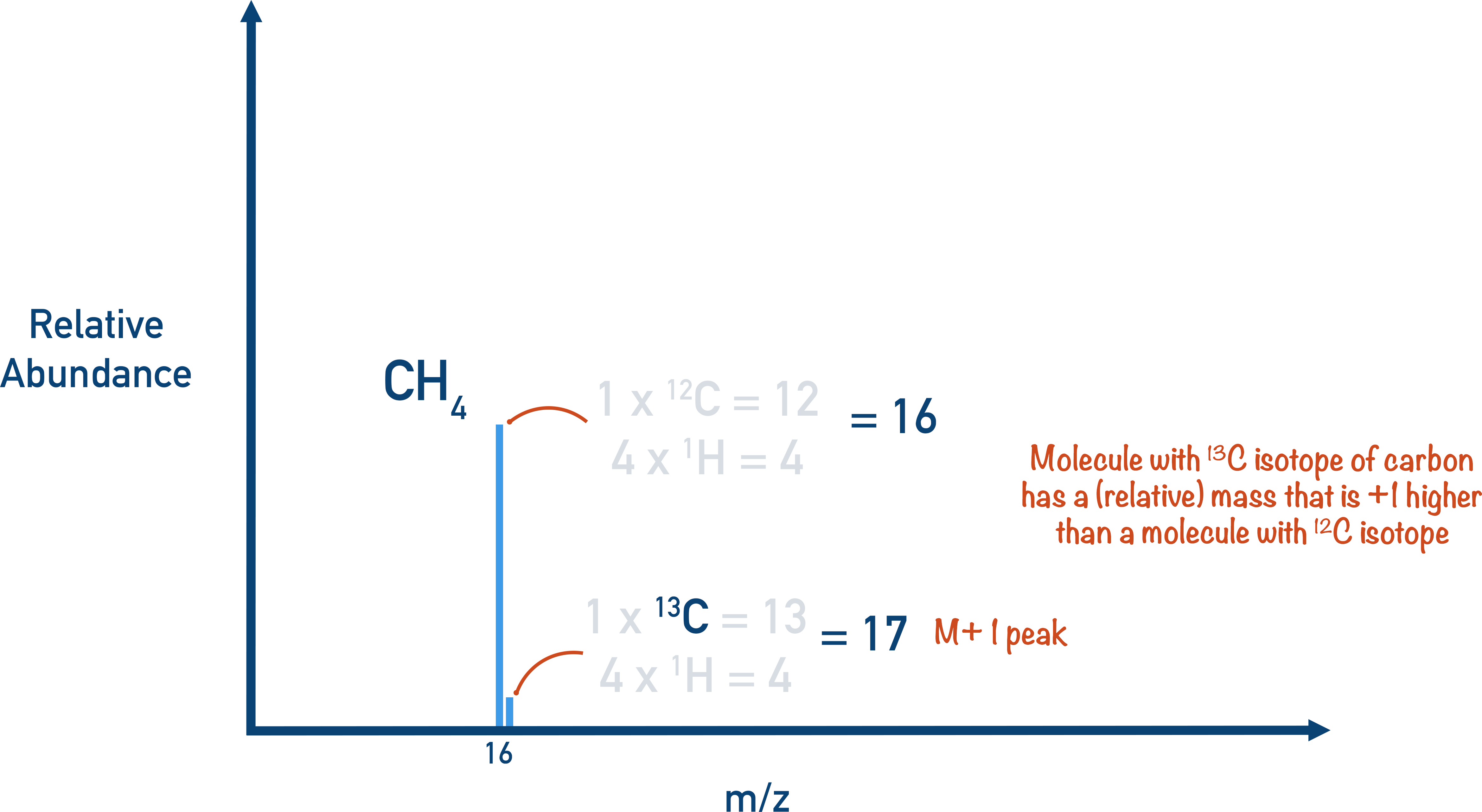 The M + 1 peak is always much smaller than the main molecular ion peak as the natural abundance of 2H and 13C is low, meaning most molecules won’t contain any. On some mass spectra, the M + 1 peak is removed.

*From the top of the page - Technically, it is the velocity of the particles that we need to consider in mass spectrometry, rather than simply their ‘speed’. The reasons for this are completely mechanical and based in physics - speed is a scalar quantity and velocity is a vector quantity. The vector quantity of velocity can be linked to the kinetic energy and acceleration of a moving object, this is why velocity is referred to. None of this is relevant for A-level Chemistry students – all you need to remember is to refer to velocity rather than speed.

This is for later in A-level study!

Mass spectrometry can also be used to find the relative molecular mass of a molecule, which can be very useful when analysing substances. Fragment ions also provide information about the structure of molecules.

When a molecule is ionised an unstable, molecular ion forms. The ion easily breaks apart into smaller pieces called fragments.

Any fragments that are charged will still pass through the mass spectrometer and be detected, meaning a spectra with a range of peaks will be produced.

The masses of fragment ions can be used to indicate the possible structure of the molecule being analysed. High resolution mass spectrometry is most useful when used alongside other spectroscopic methods, especially infra-red spectroscopy.