In organic chemistry, hydrocarbons can form cyclic compounds. A bit like a chain that links back to itself to form a necklace.

Cyclohexane is a common example of a cyclic compound, containing six carbon atoms that are linked to one another.

A specific type of cyclic compound is called benzene. In benzene, there are six carbon atoms arranged in a ring and each one is bonded to a single hydrogen atom, giving the molecular formula C6H6. The bonding that takes place between carbon atoms in benzene is what makes it so interesting and unique.

In benzene, however, things get a little more complicated. If we draw benzene (C6H6) out in the same way as cyclohexane, each carbon atom is now only forming three single bonds. 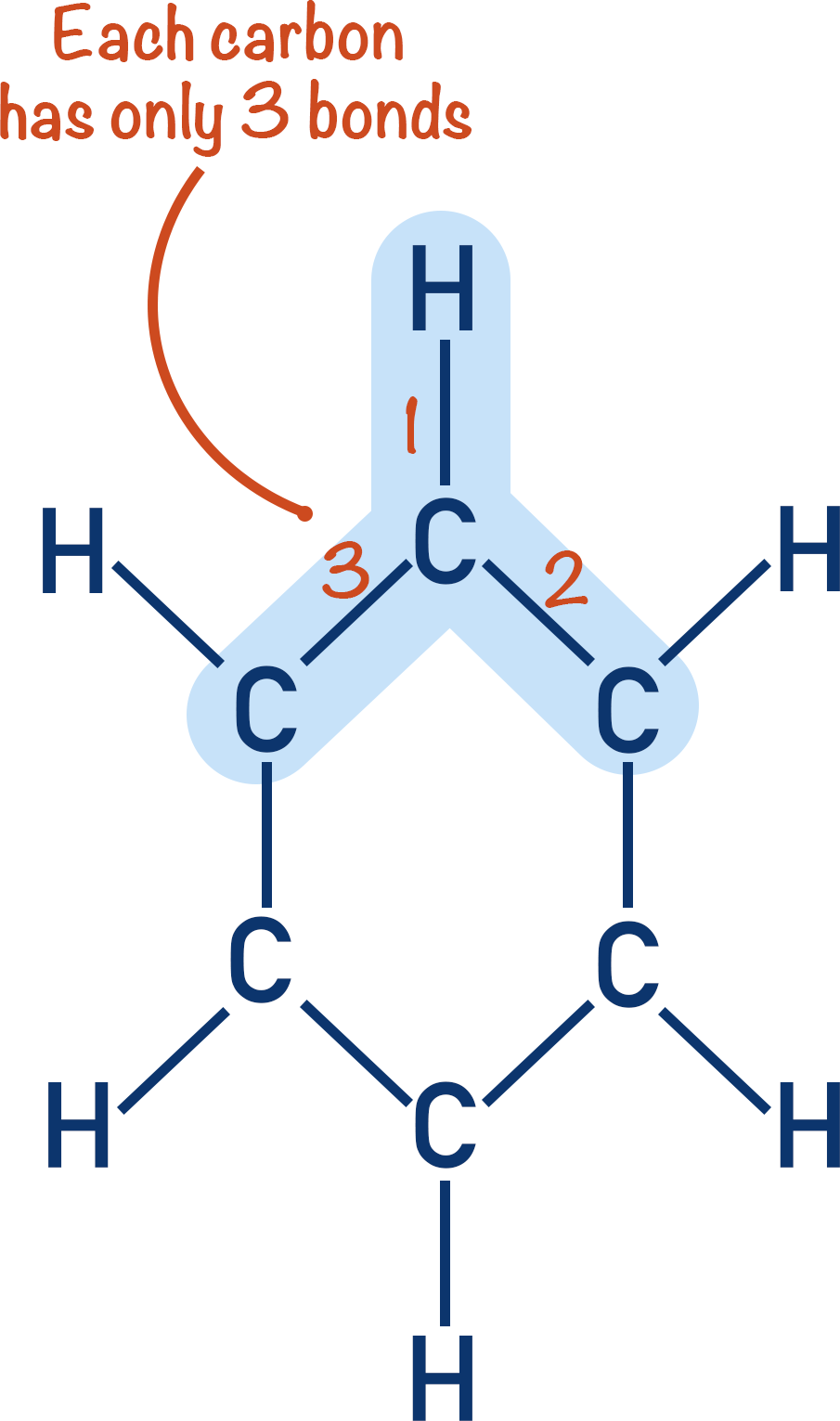 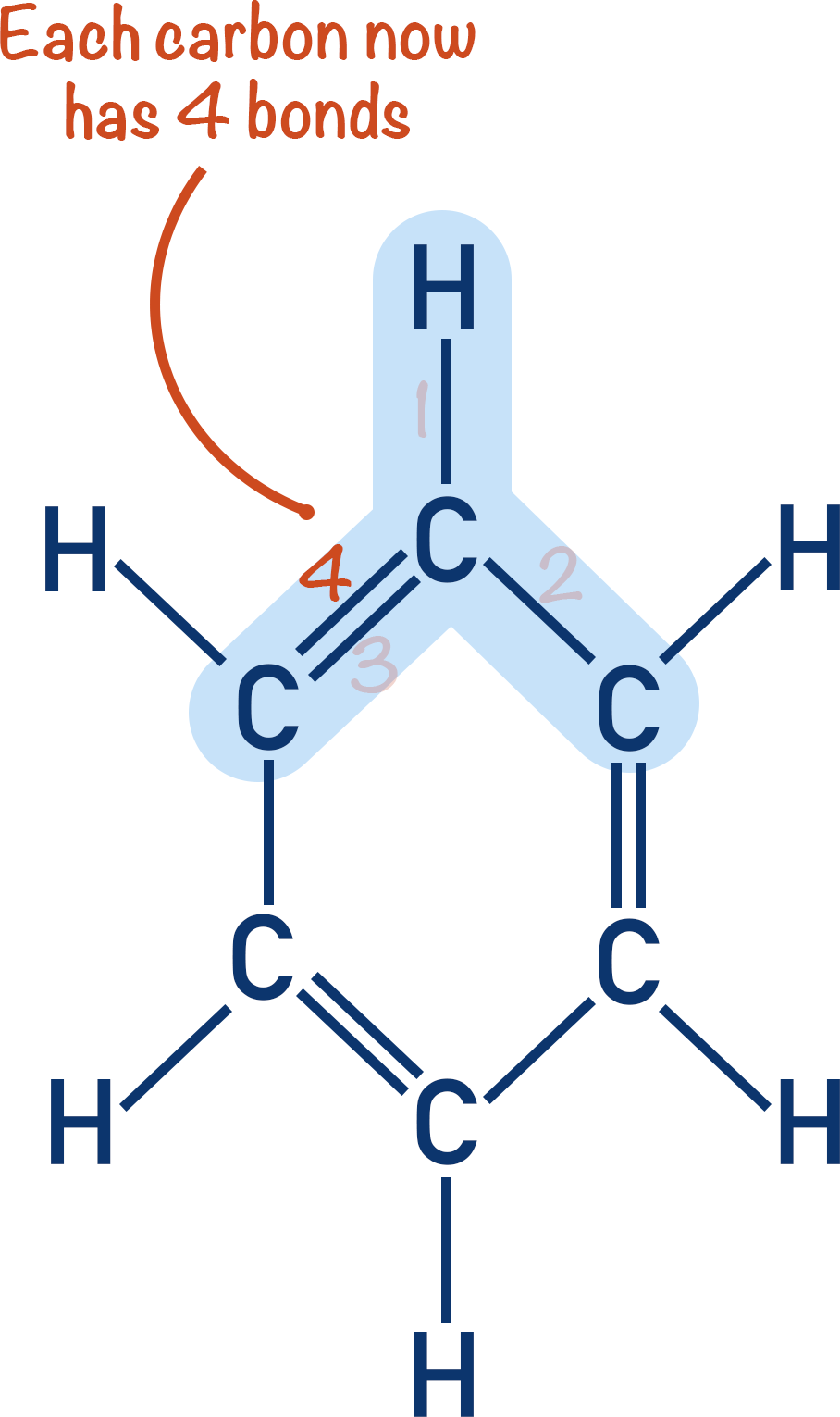 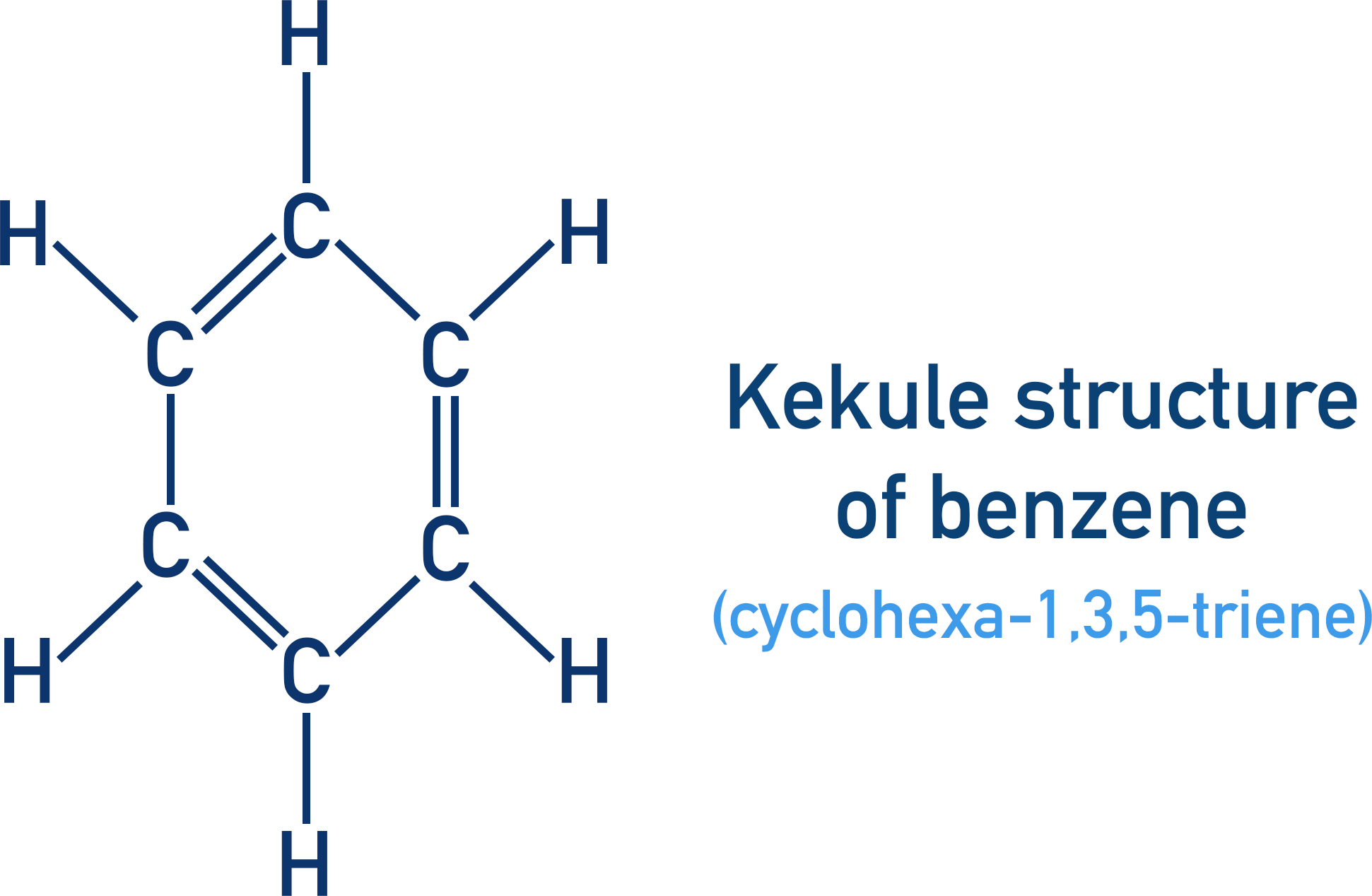 The Kekule structure does address the number of bonds each carbon atom makes, but does not fully explain the structure of benzene when we look at other properties the molecule has.

Problems with the Kekule Structure

There are two main problems with the Kekule structure: bond lengths and hydrogenation enthalpy for benzene.

Experimental data shows that all the carbon bonds within benzene have a bond length of 0.139nm. This bond length does not make sense if we think of only single and double carbon bonds, so the Kekule structure is not an accurate representation of the bonding.

In cyclohexene, there is one double carbon bond. When hydrogenated, the amount of energy released per mole of cyclohexene is 120kJ. The enthalpy of hydrogenation is -120kJmol-1. (Remember energy is released – negative enthalpy change).

This is the predicted enthalpy of hydrogenation, but the actual enthalpy change that occurs when benzene is hydrogenated is -208kJmol-1. 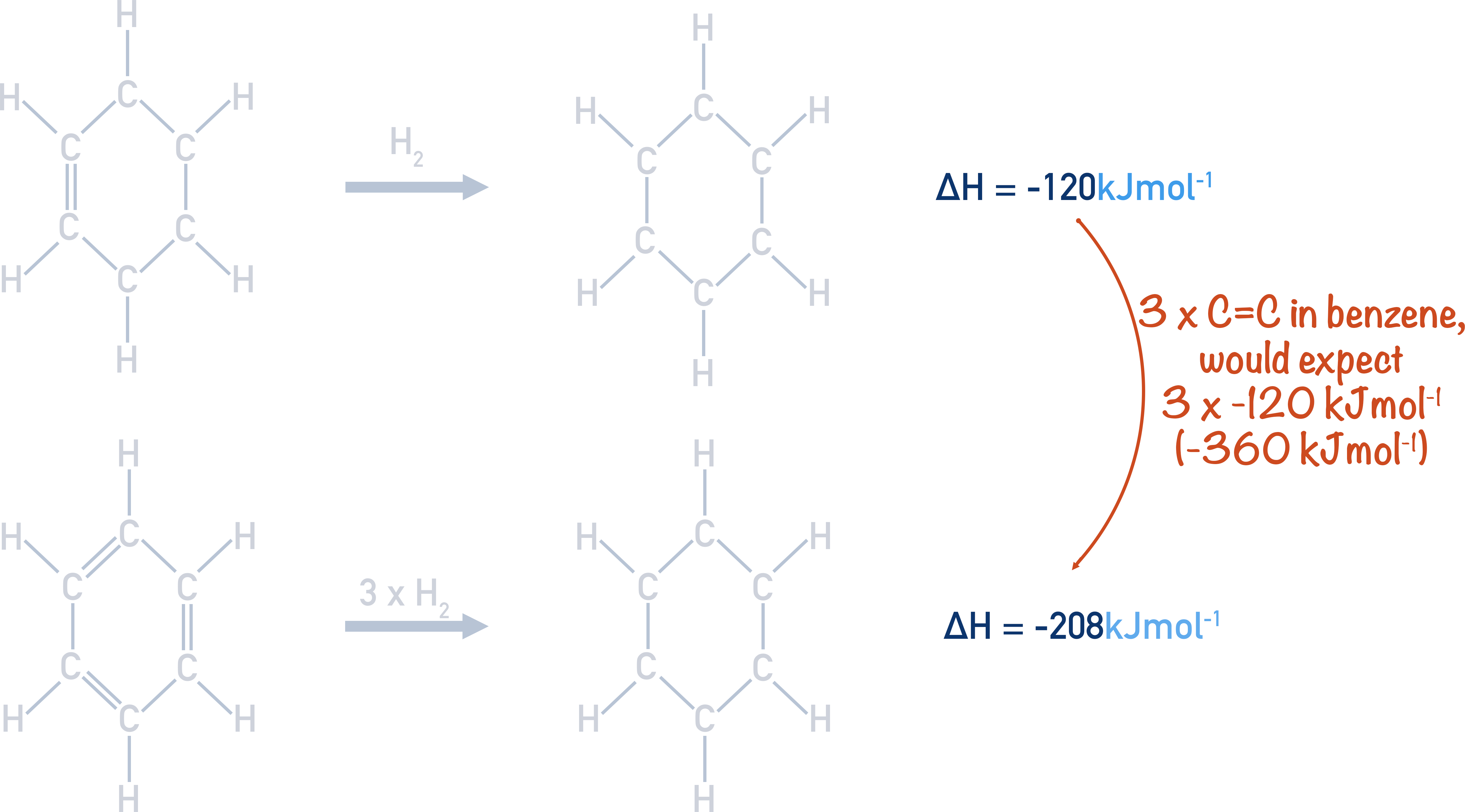 Clearly there are not three double bonds in benzene.

What is actually going on in benzene?

To really understand the bonding in benzene, we need to look at the electron orbitals around each carbon atom. Remember sigma bonds are formed when orbitals perfectly overlap, giving single covalent bonds.

Due to orbital hybridisation (not required understanding for A-level chemistry, but very interesting!), the sigma bonds are all in the same plane – this means you could take a slice through the molecule and it would pass through all three bonding atoms.The p-orbital sticks up and below this plane. 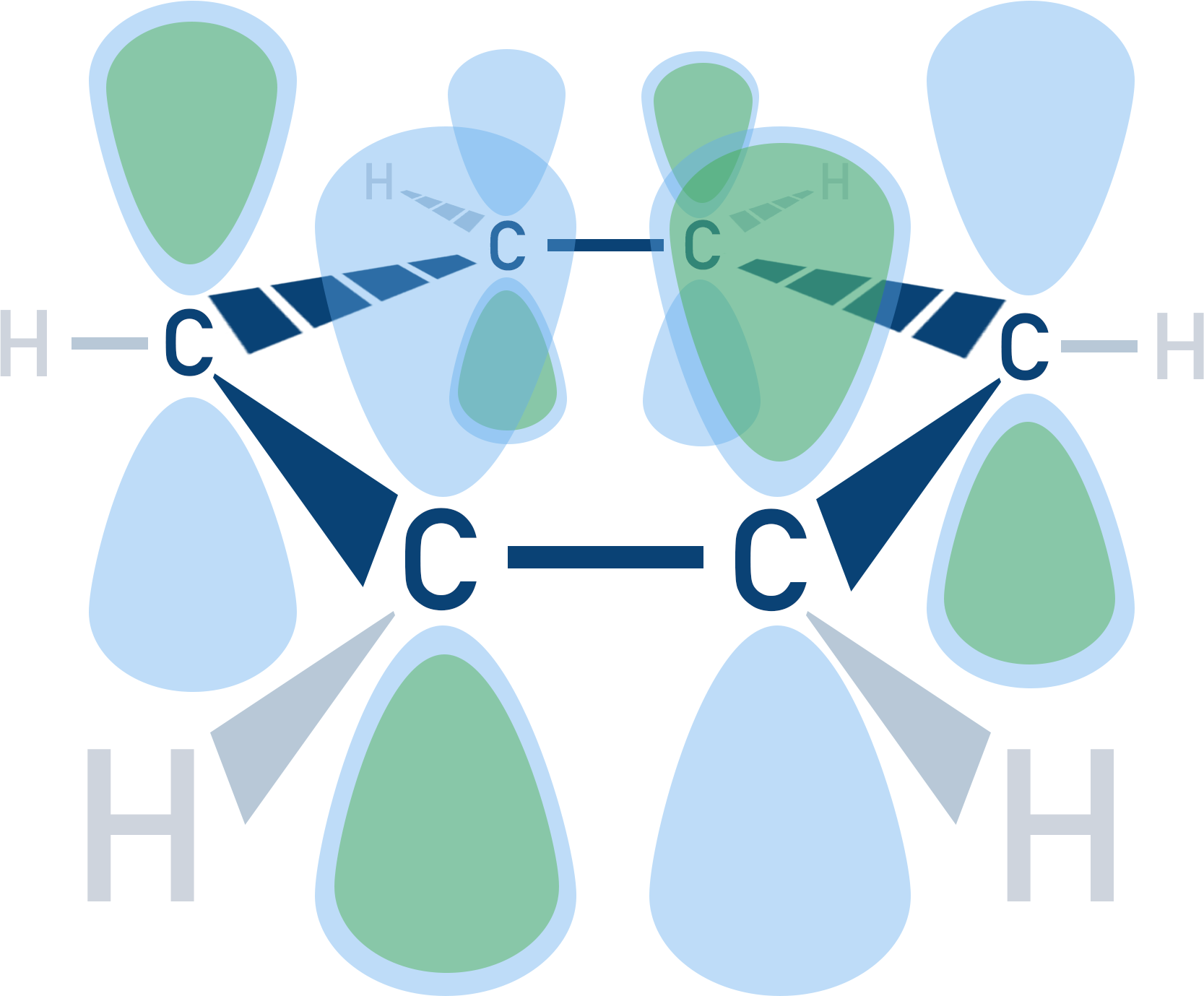 The electrons in each p-orbital repel each other. To minimise this repelling, they alternate above and below the plane of the carbon atoms. 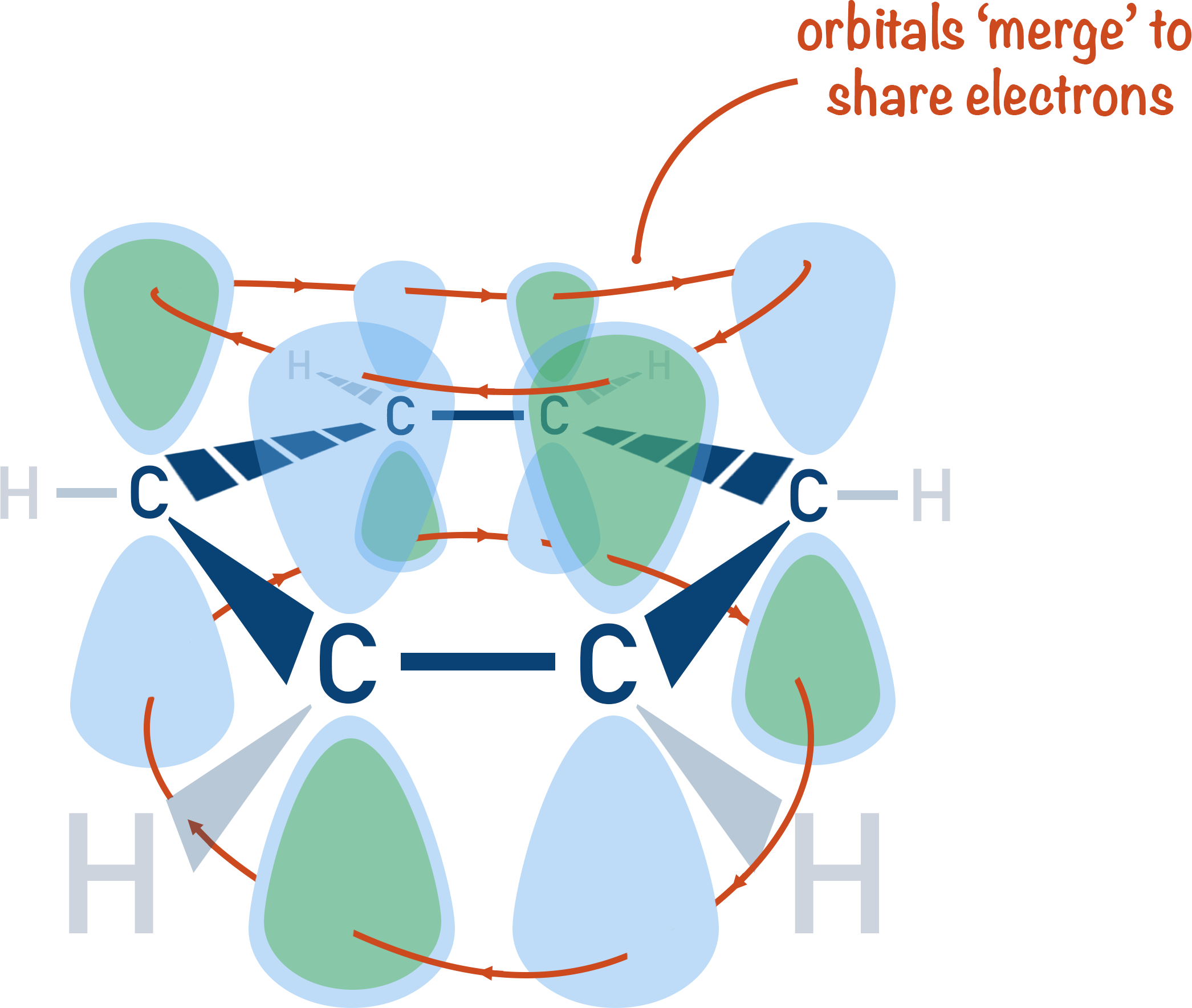 There are now three electrons ‘above’ and three electrons ‘below’ the plane of the carbon and hydrogen atoms. These half-filled p-orbitals are not stable and, rather than stay in a p-orbital, the electrons spread out evenly in two regions – one above and one below the plane. Technically, each of the two regions form a pi-bond (merging of p-orbitals to create a bonding orbital). This is why benzene is considered to have a pi-bonding system.

The electrons are no longer held in p-orbitals and become delocalised electrons. Each carbon atom has ‘access’ to a full outer shell of electrons, and all bonds are the same length (and have the same bond energies).

Due to the above, it’s not possible to draw the individual carbon bonds as either single or double bonds, so a circle is used in the middle of the ring of carbon atoms to represent delocalised electrons.

Electrons have a negative charge, and the circle represents an area of high electron density that electrophiles are attracted to. This is why benzene reacts well with electrophiles.