When bromine is reacted with an alkene, electrophilic addition occurs. The high electron density in the double carbon bond of the alkene polarises the bromine molecule, enabling an electrophile (Brδ+) to be formed that can react with the double bond.

The electrophile then reacts with the double bond in a standard electrophilic addition reaction.

However, when bromine is reacted with a benzene ring no reaction occurs without ‘extra help’. This is because benzene is unable to polarise the bromine molecule sufficiently enough to produce the Brδ+ electrophile. 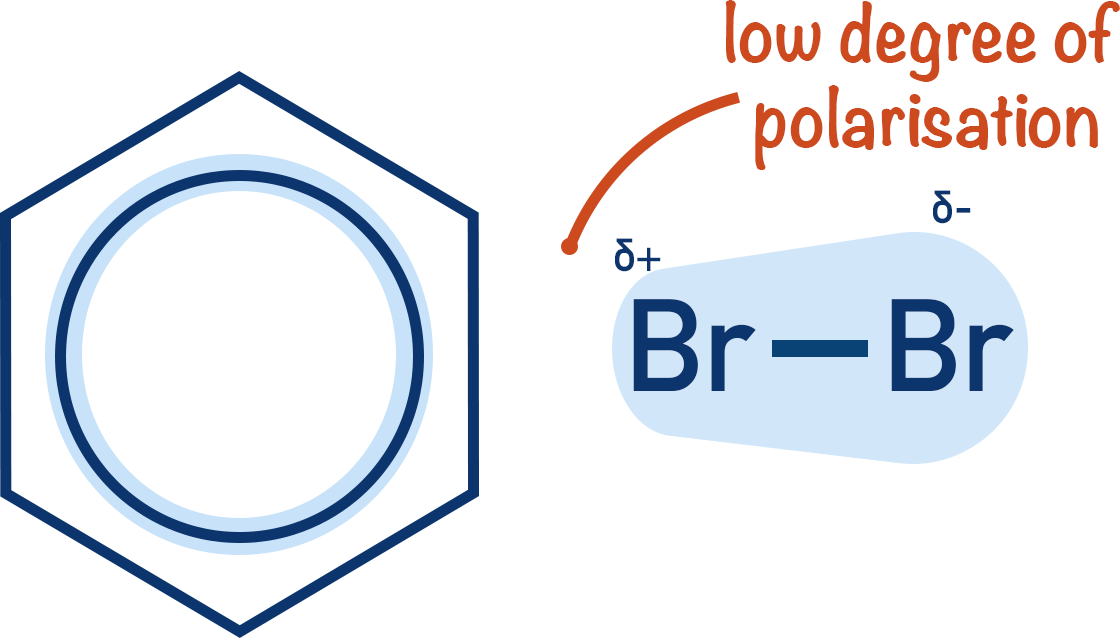 As a result, a halogen carrier is needed. A halogen carrier (usually AlBr3) polarises the bond in the bromine molecule sufficiently to allow an electrophilic substitution reaction to occur.

Why is a halogen carrier needed and how is this different to the halogenation of an alkene?

In benzene, however, the electrons that make up the pi-system are not as close together (delocalised).

Although there are more pi-bonded electrons in benzene compared to an alkene, they are more spread out. This means when a halogen molecule comes near benzene it’s not polarised as much as if it comes near an alkene. The polarisation is required to create the electrophile.

How does a halogen carrier work?

A halogen carrier is usually made by the reaction of iron or aluminium with the same halogen that is to be added to the benzene ring.

The halogen molecule is now polarised, so the benzene ring can provide just enough extra polarisation to force the molecule to break and form an electrophile that can react with the benzene (electrophilic substitution reaction).