The study of kinetics (in chemistry) is concerned with how quickly reactions happen and how altering conditions can change the speed of reactions. The speed at which a reaction occurs is called the rate of reaction. It is usually measured by a change in concentration in a given amount of time, giving the units mol dm-3 s-1. The concentration change can be of either a reactant or product.

Right ‘orientation’ refers to the way the particles collide. For certain reactions, particles have to hit each other in a certain way to react – a bit like going through a door, you have to push the door with enough energy to make it open, but it will only open if you push in a particular direction! This isn’t very important for A-level Chemistry and is generally only mentioned when dealing with the Arrhenius Equation (second year, A2-level).

The majority of collisions between particles are not successful, as the particles colliding do not collide with enough energy to react. 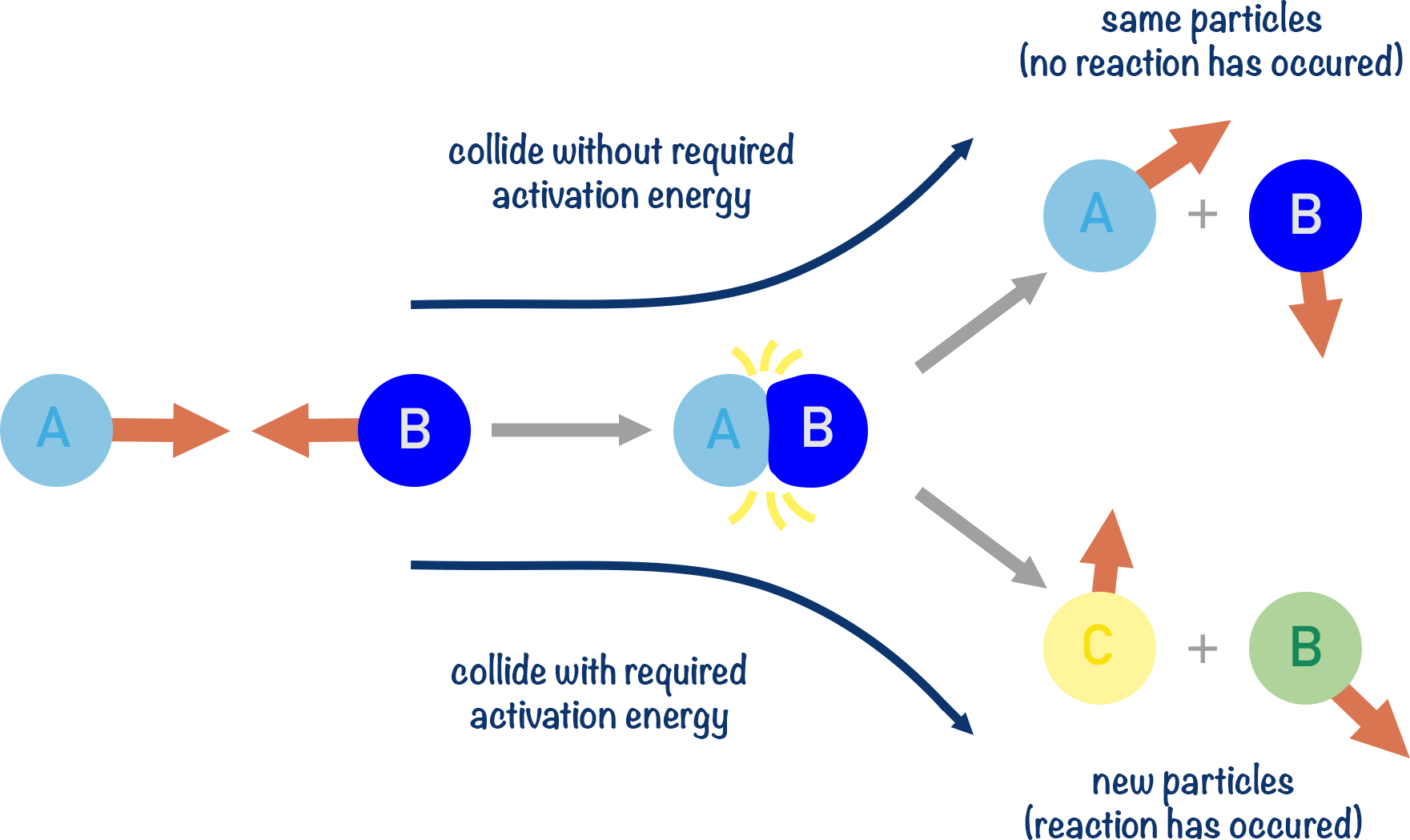 Activation energy is fixed for a particular reaction and cannot be changed (unless a catalyst is used, see below). So, when we want to increase the rate of a reaction, we have to give the reacting particles more energy or increase the number of particles colliding. This is why reactions (usually) happen faster at higher temperatures and when higher concentrations of reactants are used.

Effect of Temperature on Reaction Rate:

Imagine the reaction A + B → C. If we carry out this reaction at 25oC and at 75oC, at which temperature would we expect the reaction to happen fastest?

Effect of Concentration on Reaction Rate: 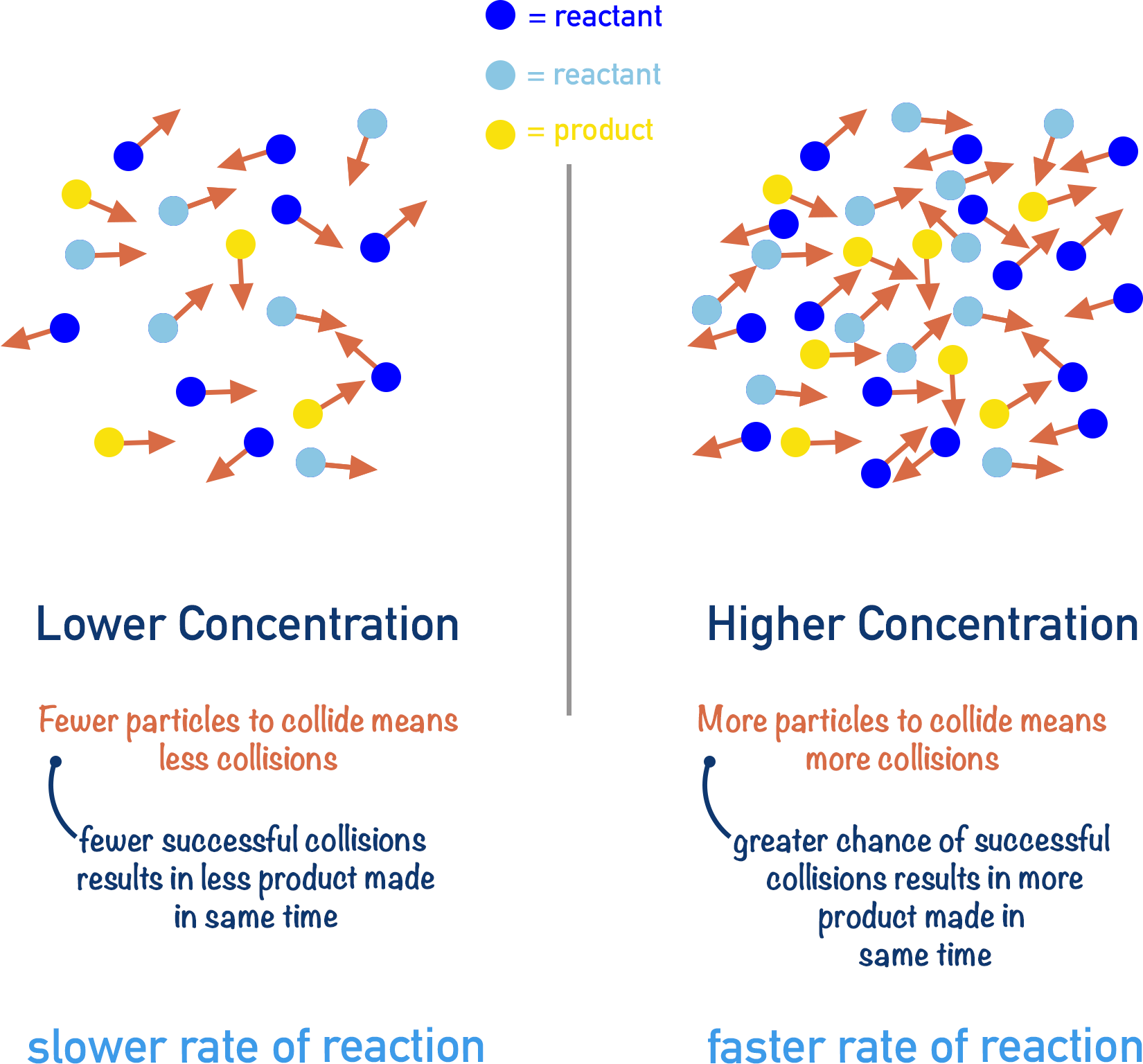 By increasing the concentration of reacting particles, the rate of a reaction is increased. The reacting particles are not given more energy, but there is simply an increase in the chances of a successful collision.

Effect of Pressure on a Reaction Rate:

In a gaseous system, increasing the pressure acting on the reactants effectively forces them closer together. This gives the same effect on the rate of reaction as increasing the concentration of reactants.

Remember – concentration is just a measure of how much of substance you have in a given volume.

By forcing particles closer together, there will be more particles in the same volume as before the pressure was increased. The number of particles in that volume increases. 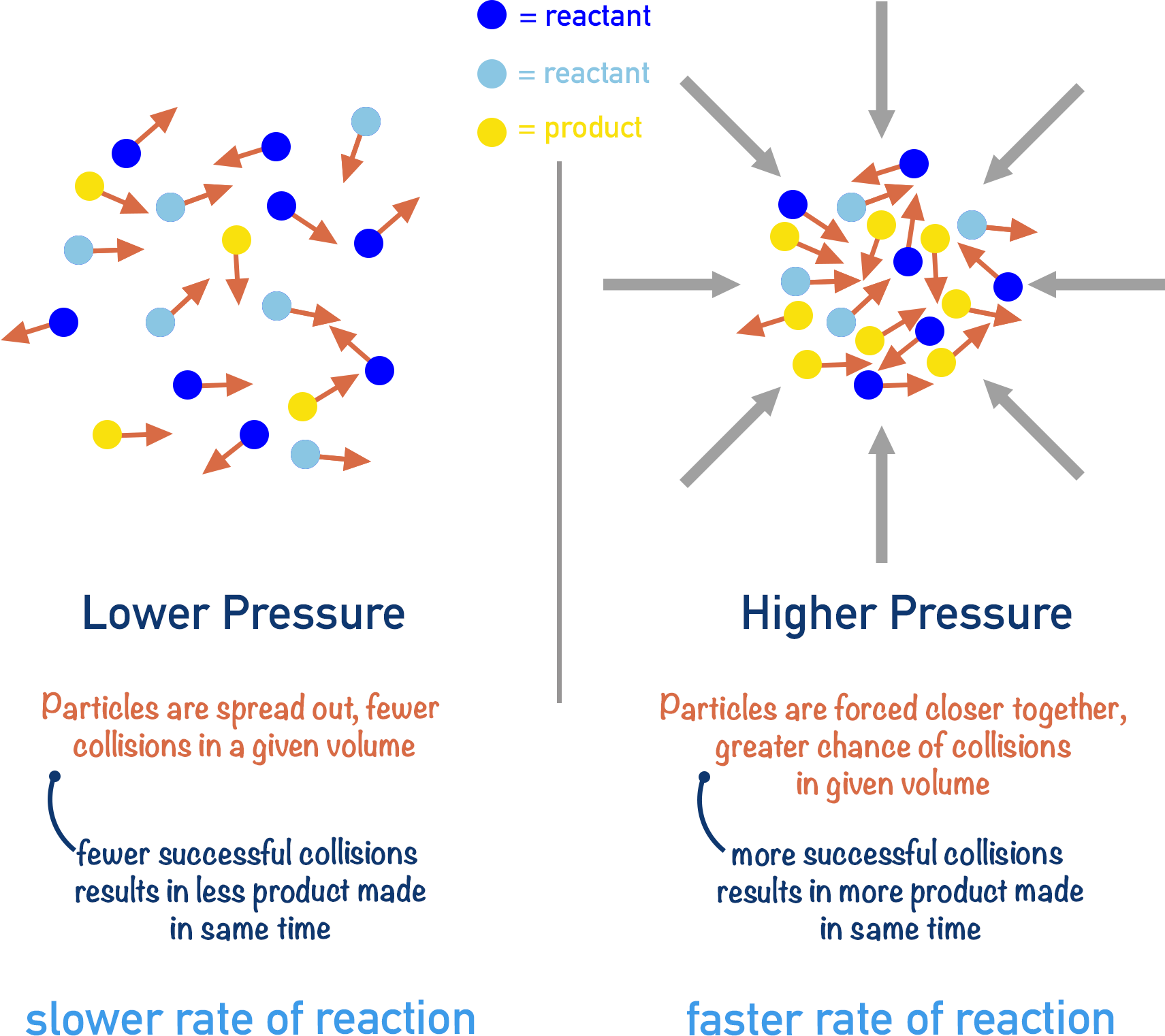 Effect of a Catalyst on a Reaction Rate:

The activation energy of a particular reaction route is fixed – it doesn't change. If we want particles with lower energies to successfully collide, the only thing we can do is to find another ‘way’ for the reaction to happen. A different way for a reaction to happen is called an ‘alternative pathway’.

Rather like going for a hike – if you don’t want to climb over a mountain to get to the other side then you need to find another way, as you cannot change the mountain.

A catalyst is a species that can provide an alternative pathway for a reaction to happen.

Catalyst – species that increases the rate of a reaction by providing an alternative reaction pathway.

To use the above example, imagine the catalyst as being a buggy that can drive you around the mountain – getting you to the same destination but saving you a lot of energy. Just like the buggy can be used again to help more people around the mountain, a catalyst remains unchanged at the end of a reaction.

Note, catalysts can actually change during the reaction but they reform at the end, so they are not considered a reactant. They are not ‘used-up’ in the reaction.

By providing a lower energy alternative pathway, the catalyst lowers the activation energy required for a reaction to occur. This means particles’ collisions that happen at a lower energy now have sufficient energy to react - there are more successful collisions.

A bit like people who are less fit are still able to get around the mountain if they use a buggy.

A catalyst does not alter the energy of the particles colliding, it simply enables collisions that happen at lower energy to become successful. These collisions were still occurring before a catalyst was used, but where before they were not successful, now they are!