Covalent bonds in a molecule can absorb specific amounts of energy, making them vibrate in a certain way. There are two ways a covalent bond can be made to vibrate: stretching and bending. At A-level, the differences between the two are not important, but the idea that energy can be absorbed by a covalent bond to make it behave in a certain way is crucial to understanding infrared spectroscopy.

The amount of energy needed to make a bond vibrate is very specific, and different types of bond will absorb different amounts of energy – this is key to infrared spectroscopy.

If a sample has a range of infrared radiation (IR) shined at it, specific wavelengths of radiation will be absorbed by the bonds in the sample to make them stretch or bend. By studying the wavelengths absorbed, it’s possible to identify the types of bond that must be in the sample.

Infrared radiation is shined through a sample, and the intensity of radiation that passes through the sample is detected.

The exact amount of energy absorbed by a bond type can be different depending on the environment the bond is in. By environment, we refer to the other atoms and the rest of the molecule the group is bonded to. This means the same bond type can absorb a ‘range’ of energies depending on the molecule it’s in. When looking at IR data, if an absorbance falls within a particular range of values, it’s assumed a particular bond is in the sample.

When a sample has a range of IR wavelengths shone at it, a detector records the wavelengths of IR that pass straight through the sample – these were not absorbed. These were fully transmitted and have a transmittance of 100%.

The wavelengths of IR absorbed by the sample don’t all reach the detector, and the intensity of their detection allows the percentage absorbance to be determined.

The absorbances are plotted on a graph called an IR spectra. 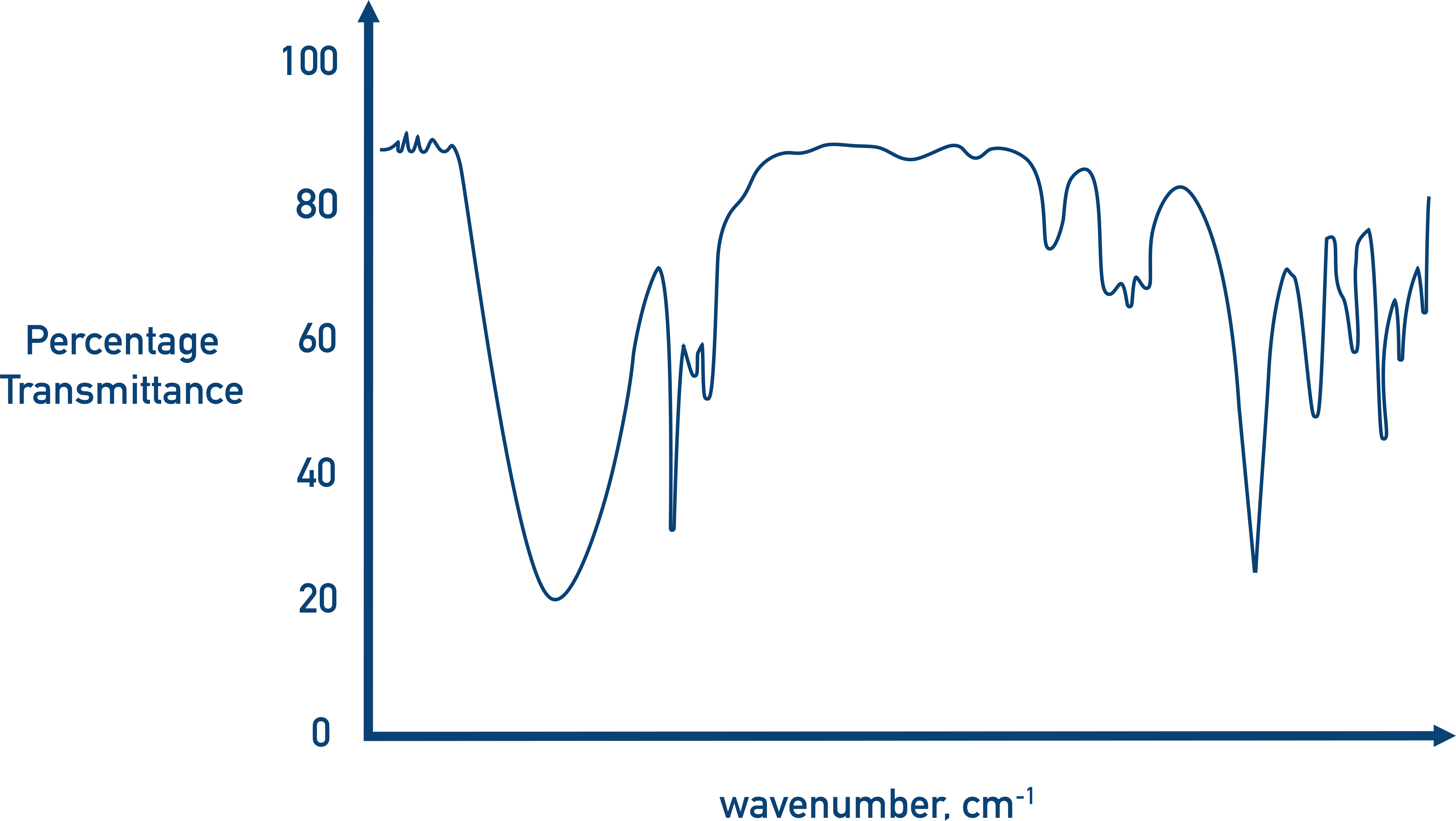 Rather than refer to wavelengths or energies, it’s the wavenumber shown on an IR spectra (the wavenumber refers to the number of wavelengths per cm). A common cause of confusion here is frequency, which refers to the number of waves produced per second and is measured in Hertz, Hz. It’s incorrect to refer to absorbances on an IR spectra as frequencies.

In organic chemistry, most bond absorbances occur between wavenumbers of 4000 to 400, so this is the range used by most IR spectrometers.

At the right of an IR spectra (between approximately 400 to 1500 wavenumbers) there is always a pattern of absorbances that are too complicated to (sensibly) analyse individually. This region is unique for every sample and is called the fingerprint region. 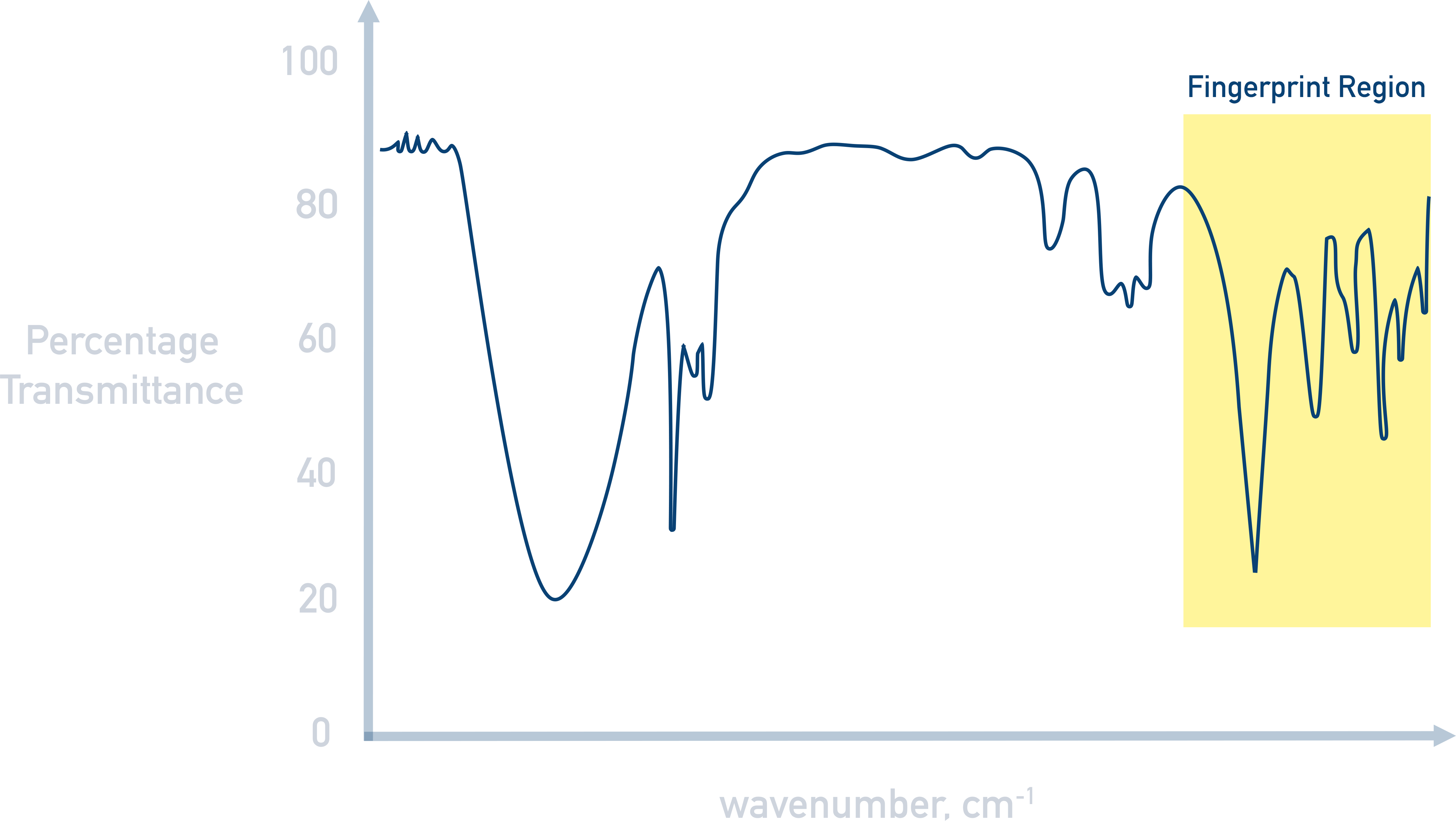 Like every human’s fingerprints are unique, this part of an IR spectra is unique for different compounds. A sample’s purity or identity can be found by comparing the fingerprint region from an analysed sample with an IR spectra for a known, pure compound.

How to Analyse IR Spectra

With infrared spectroscopy, the idea is to identify absorbances in the spectra that fall within ranges of known bond absorbances. For example, an O-H bond in an alcohol absorbs IR in the region of 3200 to 3550. If a spectra has big absorbance in this range, it’s possible the sample contains an O-H bond that is part of an alcohol molecule. 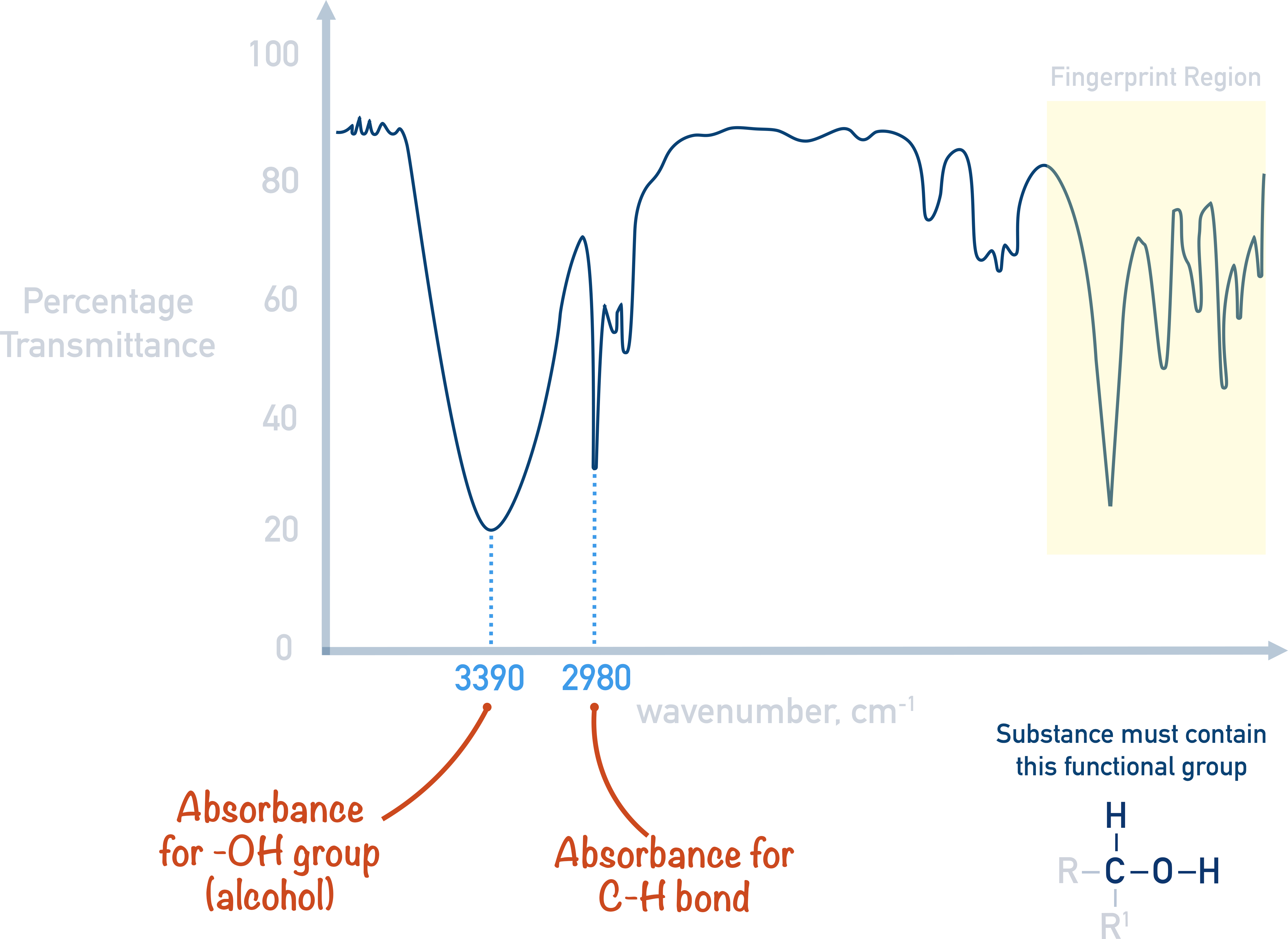 Similar bonds will naturally have similar infrared absorptions. Carbonyl (C=O) bonds all have absorbances around the 1600 to 1750 region as they all contain a carbon and oxygen double bond. However, C=O bonds can belong to a range of functional groups. As a result, other data in the IR can help to further identify the functional group the C=O belongs to.

Due to the nature of bond stretching and bending (see above), different bonds will not only absorb at different wavenumbers but some will be able to absorb over wider range of wavenumbers. This means absorbance peaks can have different appearances.

Broad peaks (brd) describe a ‘wide peak’ of absorbance where a bond is absorbing energy over a range of wavenumbers.

Strong peaks (str) describe a ‘sharp peak’ of absorbance where there is low transmittance of this wavenumber to the detector. The sample has absorbed most of the energy from the IR at this wavenumber.

Weak peaks (wk) describe a ‘shallow peak’ of absorbance where there is high transmittance of this wavenumber to the detector. The sample has not absorbed all the energy from the IR at this wavenumber.

Why are OH peaks usually broad?