Nuclear Magnetic Resonance (NMR) spectroscopy is a powerful technique widely used in the analysis of organic compounds. At its simplest, NMR is used to find out how many unique environments there are in a compound and how, with more advanced analysis, these environments interact with one another.

There are two main types of NMR spectroscopy: carbon (13C NMR) and proton (1H NMR). Carbon NMR is generally the easier of the two methods to analyse as it simply shows how many unique carbon environments there are in a compound.

Proton NMR follows the same basic theory as carbon NMR, except it’s analysing the proton (hydrogen) environments within a compound. With high resolution NMR, how the proton environments interact with each other can give information about how the environments are arranged in the compound, allowing potential structures to be predicted. These ‘interactions’ arise due to a phenomenon called ‘spin coupling’. Spin coupling is commonly the area of NMR students find most demanding, and analysing spectra (graphs produced during NMR analysis) is a skill that takes time and practice to build.

A-Level chemistry students are not required to understand the complete background theory to NMR spectroscopy. However, knowing how the process works helps enormously with interpreting spectra data.

Sub-atomic particles possess a characteristic called ‘spin’. This spin, for A-level purposes, can be thought of as the particle spinning on its axis (rather like planet Earth ‘spinning’). There are only two directions a particle can spin in; these directions are referred to as +½ and -½. 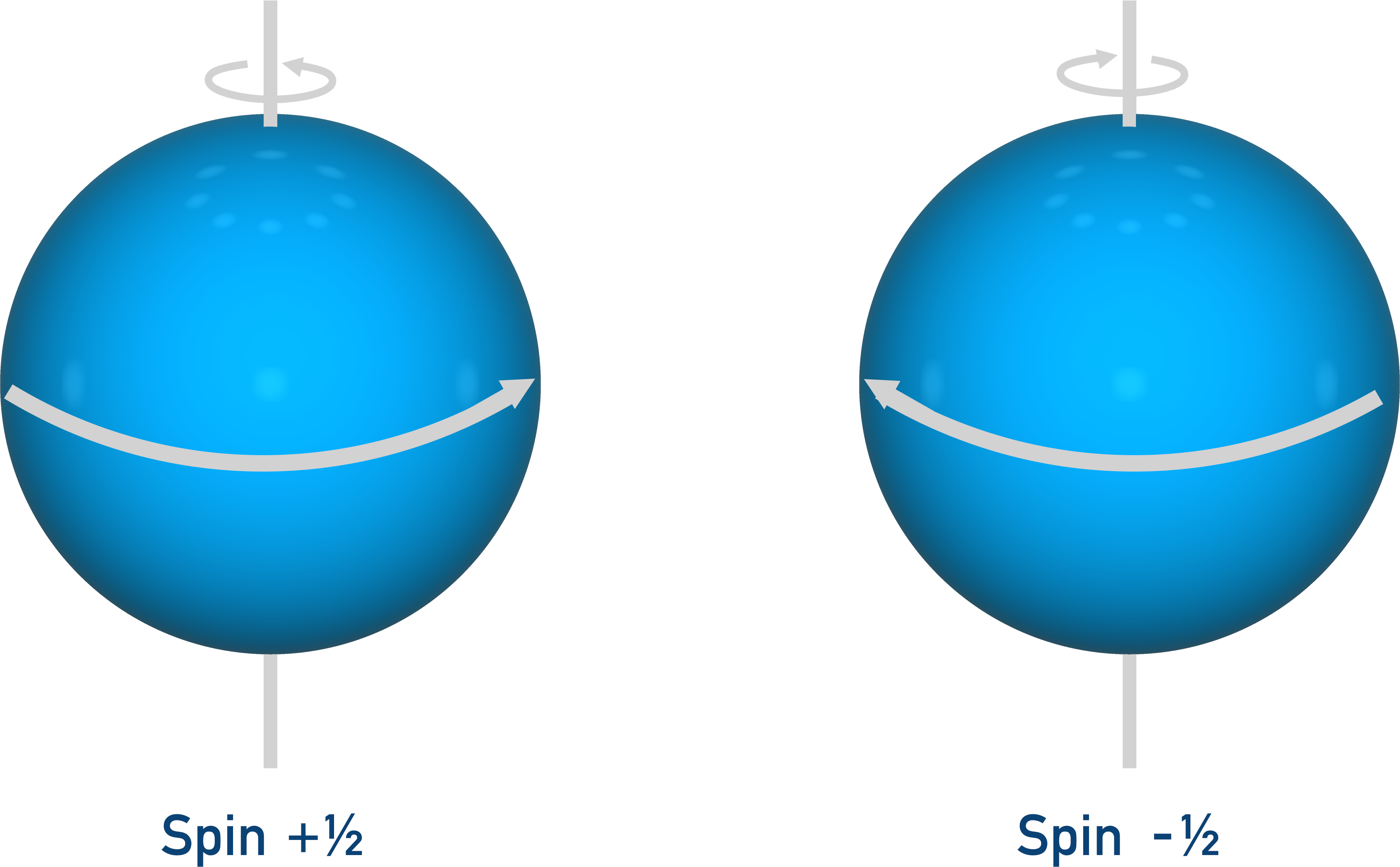 A nucleus with an overall spin is almost ‘wobbling’ on its axis (called angular momentum). Rather like a spinning top trying to stay upright.

In a similar way to a bar magnet, the magnetic field created by the nucleus has a direction. It is the purpose of NMR spectroscopy to ‘flip’ this direction and, in very simple terms, compare the amount of energy required to do this for different nuclei environments.

If you wanted to ‘flip’ a small bar magnet again, you would have to use energy to force it to go against the external magnetic field. (A bit like trying to force two magnetic south poles together).

In NMR spectroscopy, it’s the same idea: a spinning nucleus acts as a small bar magnet, and an applied external magnetic field is applied (shown as B0).

The external magnetic field forces the nucleus to spin a particular direction (+½). By providing just the right amount of energy, the spinning nucleus can be forced to spin in the opposite direction (-½). When this happens, we say ‘resonance’ has occurred and the nuclei now has a magnetic field direction that is against the applied magnetic field (B0).

By changing the strength of the applied magnetic field, the energy required to change the spin of the nucleus can be changed and it can be made easier or harder to force the nucleus to reach resonance.

The energy used to ‘flip’ nuclei and cause resonance comes from radio waves with a set frequency. A sample is bombarded with radio waves (all with the same frequency) and a detector detects whether they have been absorbed or have passed though.

Carbon and hydrogen nuclei within a molecule will be shielded differently if they are in different environments. Meaning, for a specific frequency radio wave, different strengths of applied magnetic field (B0) are required to flip their spin. These energies show on a spectra as absorptions, and the number of absorptions within a spectra indicates the number of different nuclei environments (for one type of nuclei) in a molecule.

Chemical shift refers to the difference between the absorption in TMS and in the nuclei of a sample compound.

Carbon and proton nuclei in TMS have a high electron density around them, so there is a high level of shielding.

Alternatively, a proton in an OH group has a very low electron density around it, due to high electronegativity of the oxygen compared to the hydrogen. As a result, the proton in the OH group will absorb a different energy to the protons in TMS – measured as a ‘shift’ from 0 and plotted on a spectra.

The lower the electron density around a nucleus, the lower the energy required to ‘flip’ its magnetic field, and the further away from the standard (TMS) 0 peak it will be. The absorption is said to be ‘downshifted’.

Certain types of environment (for example, OH) will always have absorbances at similar shifts, enabling types of nuclei environment to be predicted from the position of a chemical shift on a spectra. Very small changes in electron environments change the exact chemical shift, so a ‘range’ of shifts are usually given for a particular type of environment. For OH, this range is usually 0.5 to 5.

Perhaps the most useful, but also most confusing, aspect of NMR spectroscopy is spin-spin coupling. 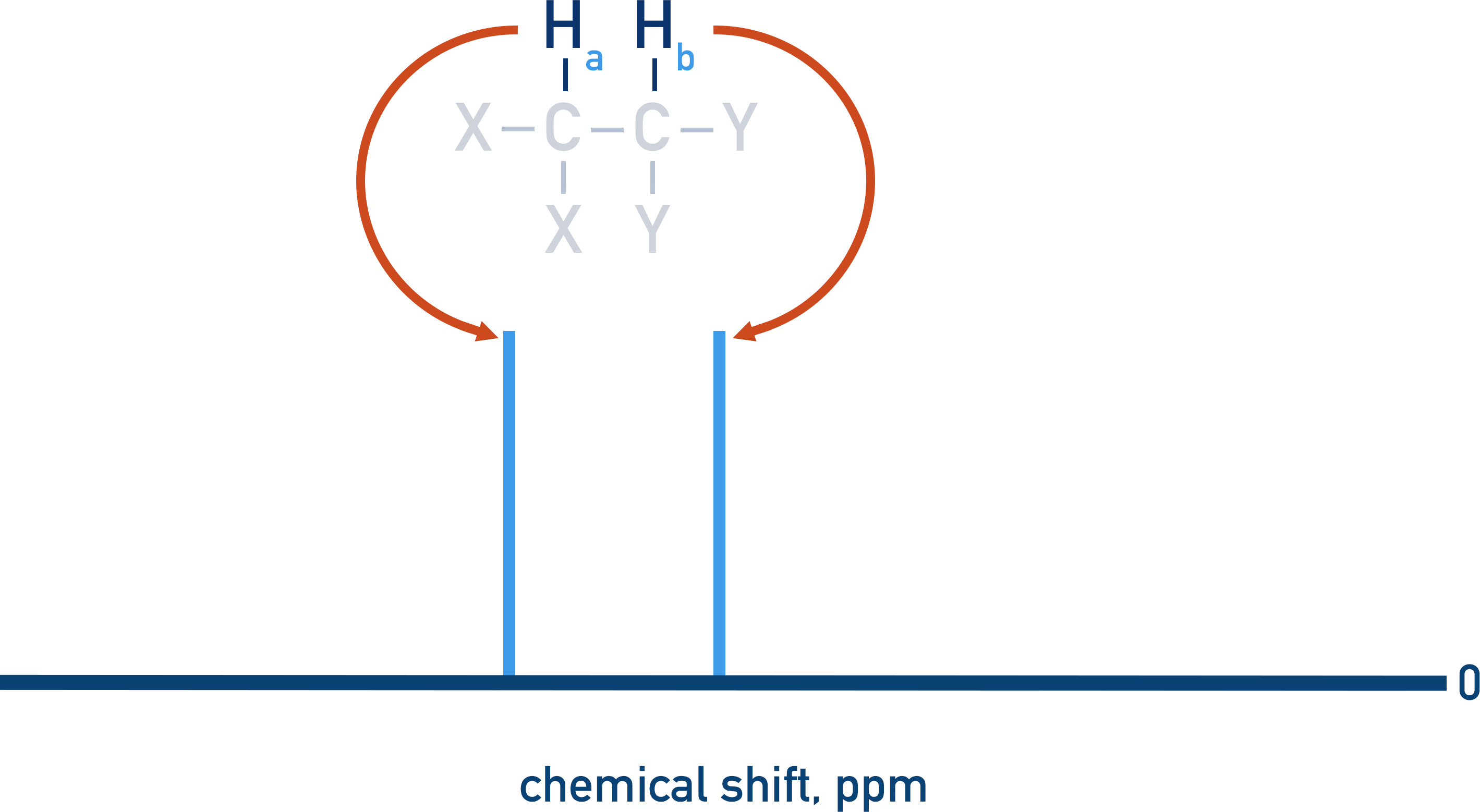 Each proton can either be aligned to the external magnetic field or non-aligned.

Let’s assume we are trying to ‘resonate’ Hb with an external magnetic field.

The Hb peak in the spectra is now ‘split’ into two lines: one line for when Ha’s magnetic field ‘helps’ resonate it and one line for when Ha’s magnetic field makes it harder to resonate it. This is referred to as a splitting pattern, and the unique splitting patterns that arise in a spectra can give useful insight into the bonding arrangements in the sample.

Equivalent protons are unable to spin-spin couple, meaning any split peaks on a spectra are caused by neighbouring protons on adjacent, non-equivalent carbon atoms.

The more protons there are in a neighbouring environment, the more ways a peak can be split. For example, if we take the same molecule as above but now put two protons in one of the enivronments, the splitting that occurs is more complex. 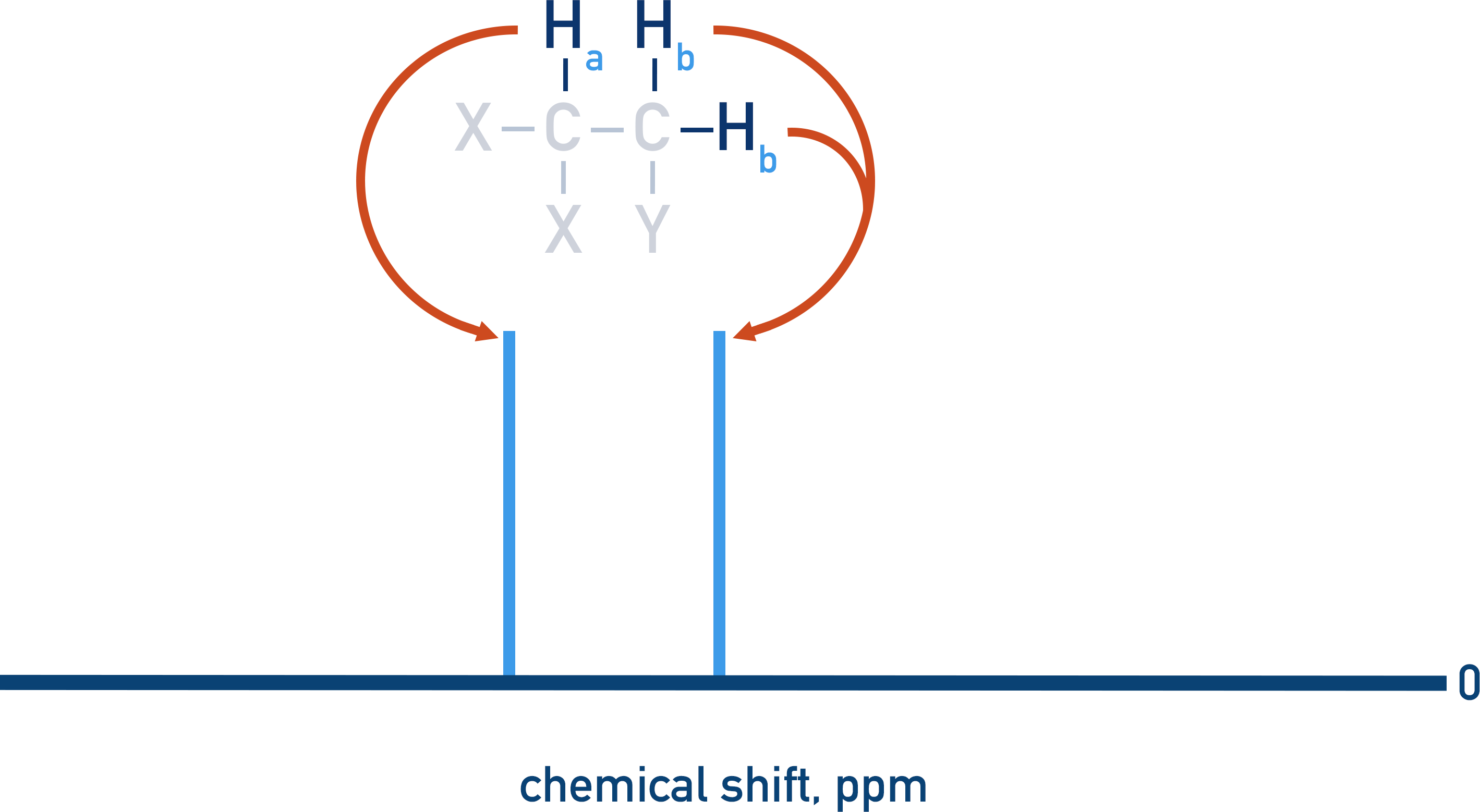 If we try and make Ha resonate, the two Hb protons can interfere with the applied magnetic field, causing Ha’s peak to be spilt into three (a triplet).

It’s more likely that the two Hb protons will have opposite spins rather than the same spin, meaning the intensity of the three splits are different. 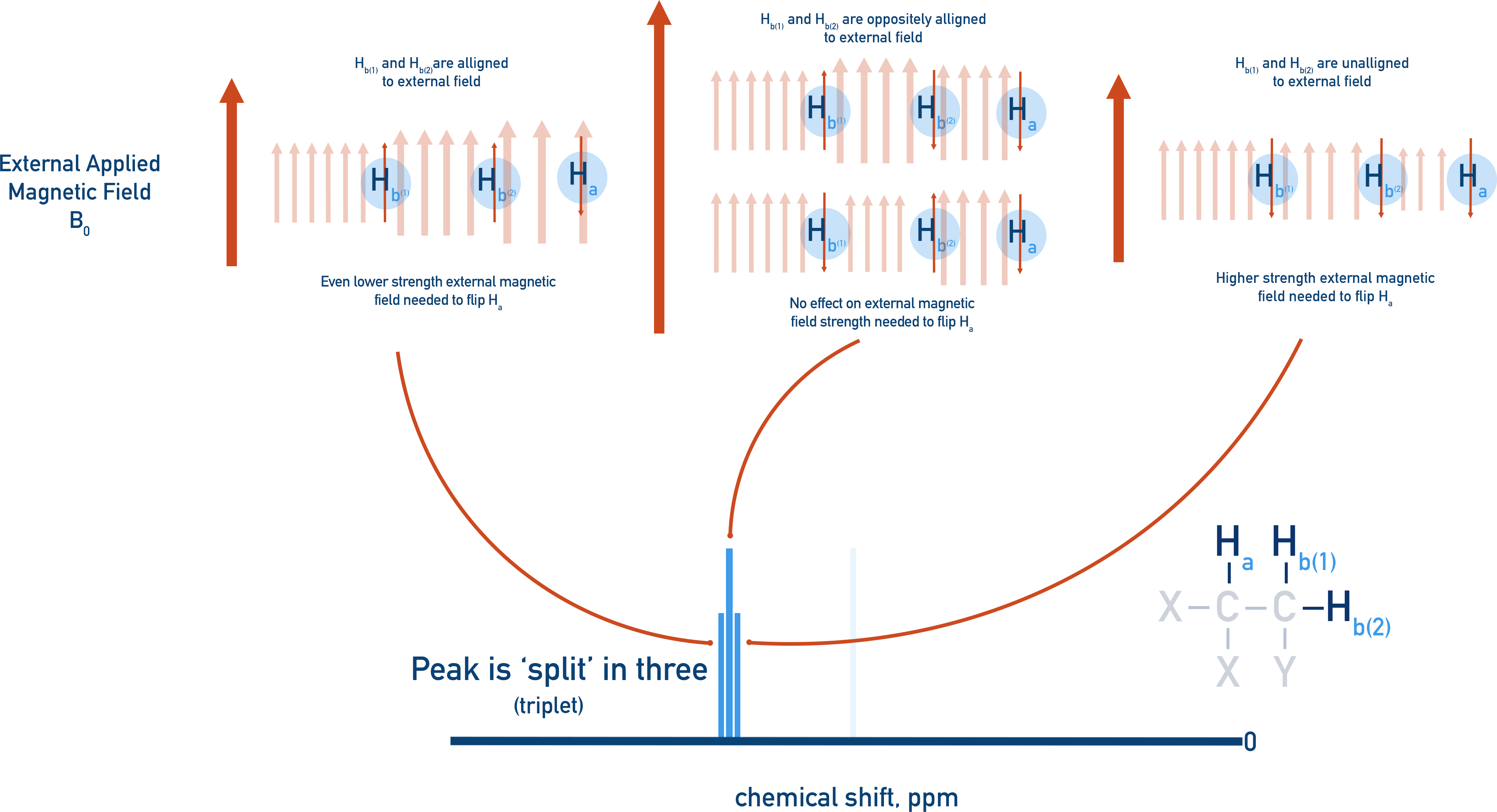 The number of times a peak can be split is dependent on the number of protons bonded to adjacent, non-equivalent carbon atoms.

This is useful to know when analysing spectra as it means the number of hydrogen atoms bonded to adjacent, non-equivalent carbon atoms can be determined from peak splitting.