Buffer solutions contain a mixture of a weak acid and its conjugate base that form an equilibrium system. The position of the equilibrium that exists between the two can move, minimising a change in the pH of a solution when H+ ions are added or removed (by the addition of OH-(aq)ions).

The above description is supposed to be a little blunt! If any ideas in the above are confusing or new to you, please read the relevant sections in ‘Acids and Bases’ before you continue with buffer solutions. The main reason students find buffer solutions difficult is because they don’t have a full grasp on the above topics before they attempt to learn about buffers. Once ‘acids and bases’ and ‘equilibrium’ are well understood, buffers solutions and calculations involving them become much more straightforward.

In a buffer system, an equilibrium forms between the weak acid, its conjugate base and H+(aq)ions in a solution.

The purpose of a buffer system is to keep the pH of a solution as constant as possible if H+(aq)ions are added or removed. By removal of H+(aq)ions we mean the addition of a base or hydroxide ions (OH-(aq)). This will become clearer later on!

From basic equilibrium theory, we know that if the concentrations of the HA or H+ and A- change, the position of equilibrium will move to oppose the change.

To get around this problem, a large excess of HA and A- is used (compared to H+(aq) concentration).

Excess means more of something than is required for a process – in this case, that means substantially more HA and A- is present at equilibrium than H+.

Now, if the amount of HA and A- is changed slightly, the change will be very small compared to their original amounts and it will not radically alter their concentrations. It is (mainly) the concentration of H+ ions that becomes the focus for the position of equilibrium. 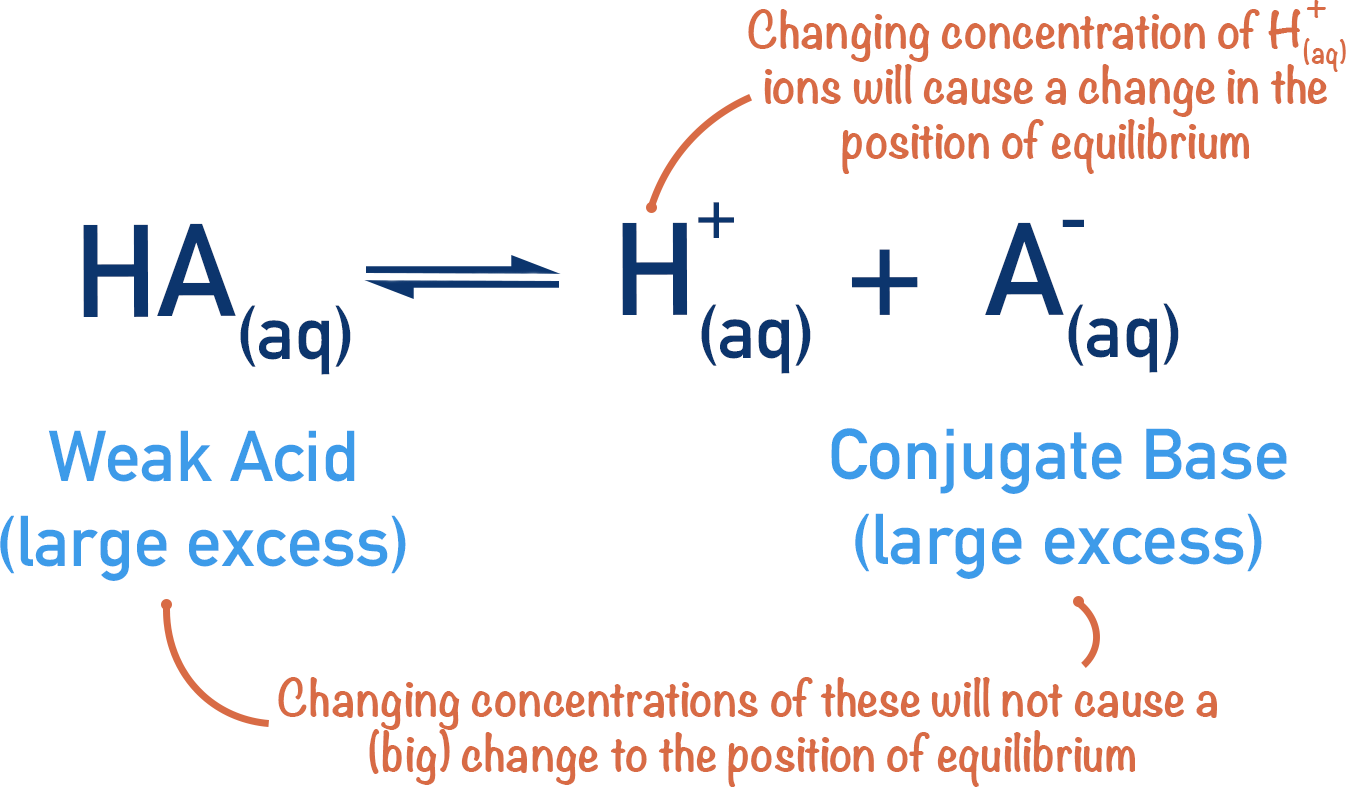 Note – the pH change is only minimised - there is still a slight change. Although very small, there is a change in the concentrations of HA and A- when the position of equilibrium moves and this causes another adjustment to the position of equilibrium, causing an alteration in H+(aq)concentration. As outlined above though - because the original amounts of HA and A- are in excess, this change is very slight.

To make a buffer solution, a weak acid (HA) and its conjugate base (A-) are needed. It is after they are mixed together that an equilibrium is established. The amount of each needed depends on the ‘desired’ pH of the buffer solution. 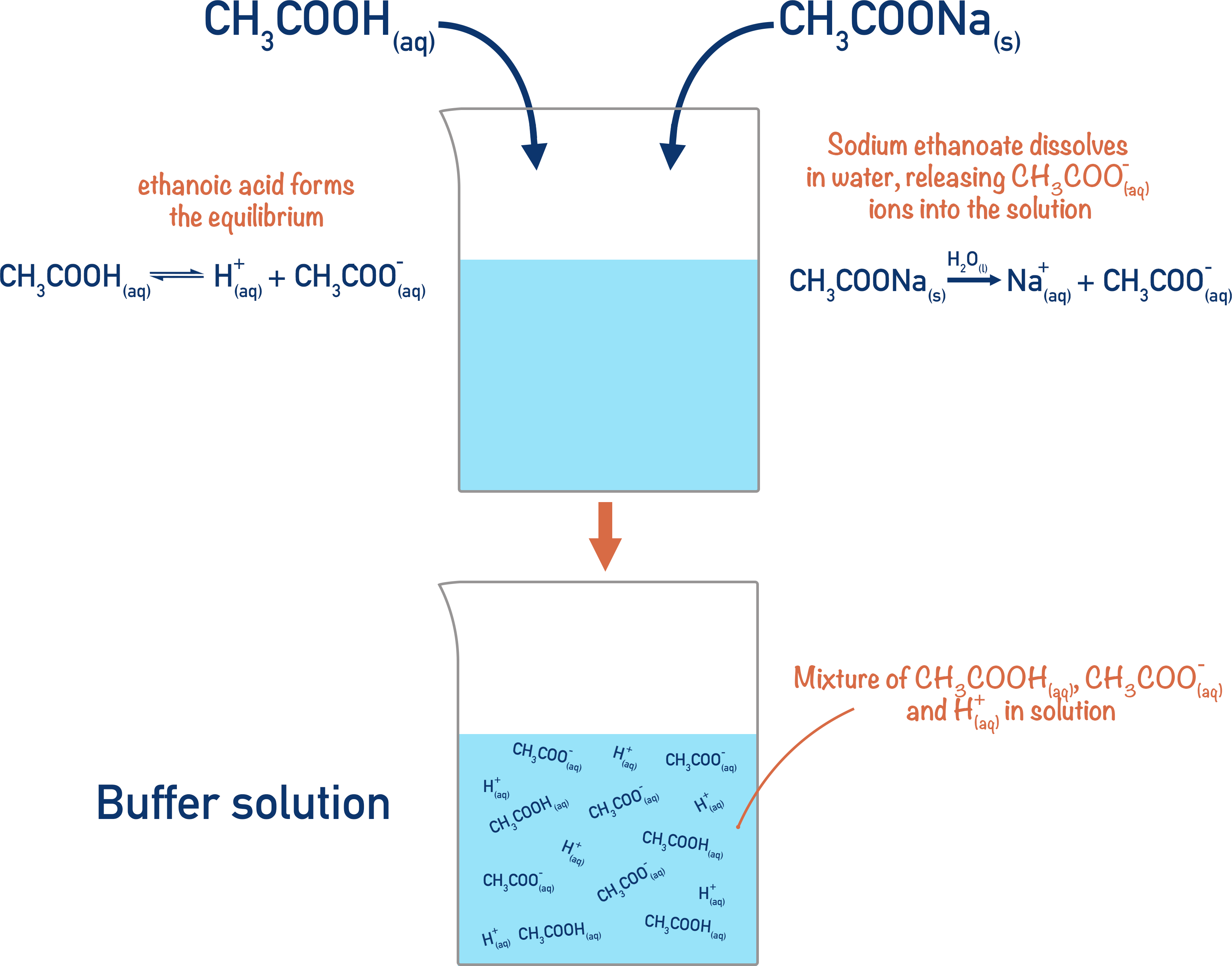 How does a buffer work?

There are only really two ways a solution can change pH: more H+ ions are added to the solution or H+ ions are removed. A buffer is able to ‘act’ in both possible scenarios.

Here, the position of equilibrium will want to oppose the change and remove the added H+ ions to restore the concentration back to the level it was before the ‘extra’ H+ ions were added.

It does this by moving the position of equilibrium to favour the backward reaction (A- + H+ → HA). Excess A- reacts with the ‘added’ H+ ions and forms HA. The added H+ ions are removed and the pH stays (nearly) the same. However, the amount of HA and A- now changes – the amount of A- will decrease and the amount of HA will increase.

This is not strictly speaking ever possible! What we mean is a base or alkali is added which reacts with the H+ ions present, decreasing the concentration of H+ ions in the solution.

In this situation, the position of equilibrium will move to increase the concentration of H+ ions back to the original level (before the base or alkali reacted with them). To do this, more HA will dissociate (forward reaction favoured) to produce H+ ions and A- ions; the amount of HA will decrease and the amount of A- will increase.