In chemistry, energy is involved in reactions. We know from basic kinetic theory that in order for particles to react, they have to collide with the required activation energy. The products formed are either at a lower or higher energy than the reactants.

Exothermic reactions generally occur more easily because they release energy, meaning no overall energy input is required. Nature is lazy, so reactions that do not require an overall input of energy are more likely to occur than those that do.

Endothermic reactions can and do occur in chemistry though because it’s not just enthalpy changes that determine whether a reaction can happen. Entropy is also a factor that determines how likely a reaction is to happen.

Imagine a wardrobe with clothes in it. The more clothes you have, the more ways you can hang them in the wardrobe – there are more possible ways of ‘arranging’ the clothes in the system (the system here being everything inside the wardrobe). 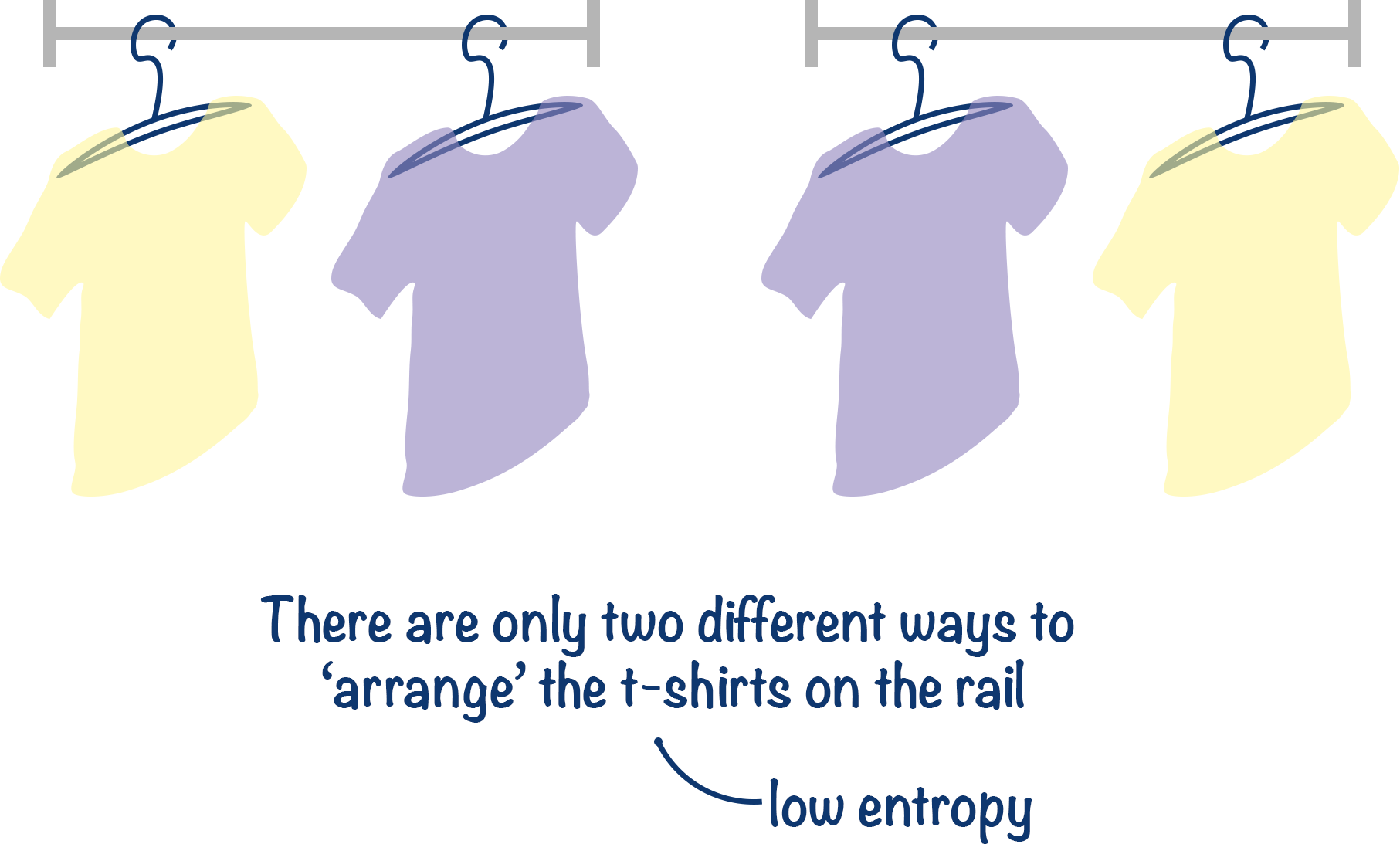 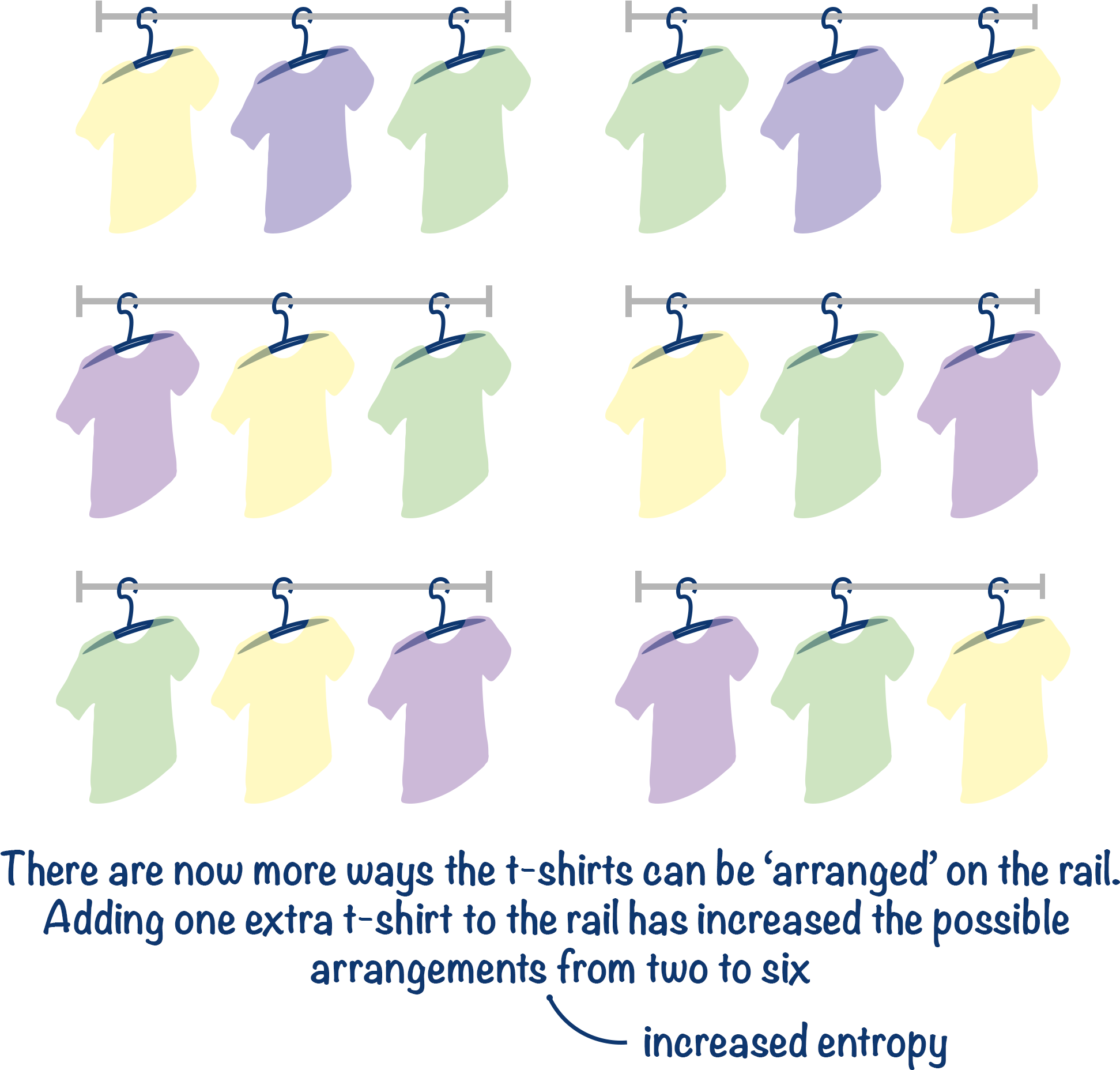 This same theory applies to particles in a system, except we also need to think about the state the particles are in (not just the number of particles).

In a solid, for example, particles cannot move around easily – they have to be in a fixed, regular order. As there are not many ways to arrange these particles in space, the entropy of the system would be low. The system has a low level of ‘disorder’.

In a system with gaseous particles, however, there are a vast number of ways to arrange these particles, so the entropy of the system would be high. The system has a high level of ‘disorder’. 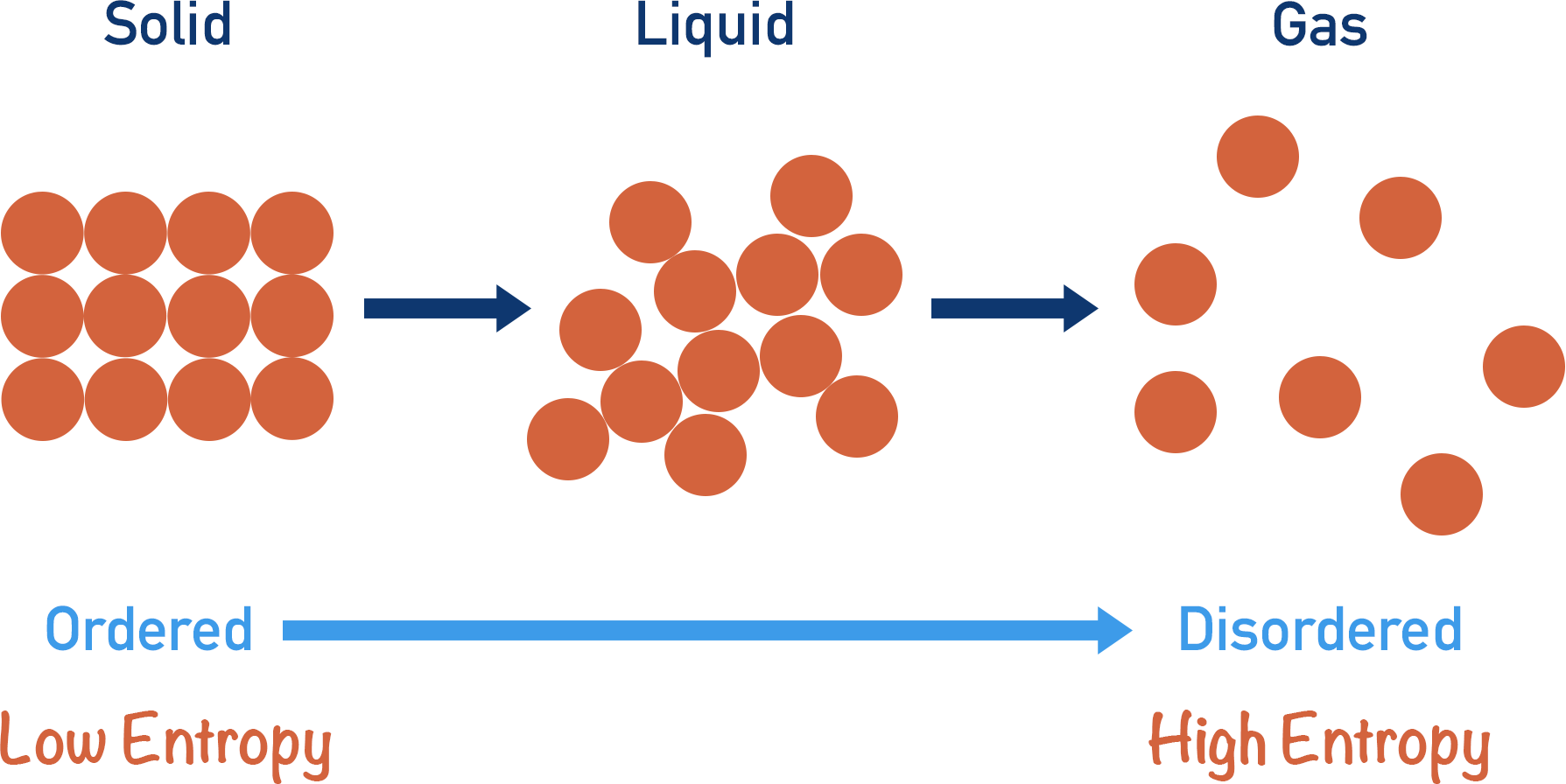 It is important to note that entropy, like enthalpy, is only really useful as a relative term. Comparing the entropy of one system to another can give us a good idea as to whether a reaction is likely to happen.

Nature is lazy but also completely chaotic – nature prefers systems with higher entropy. See bottom of the page for why!

In simple terms, the total energy of a system is lower if there are more ways to arrange the particles within it. We know that nature prefers to form lower energy systems, which is why systems with high entropy are more likely to form than systems with low entropy.

It is not that simple though!

We now have two factors influencing whether a reaction is likely to happen: enthalpy change and entropy change.

To describe whether a reaction is likely to occur we have to link these two factors together.

Entropy – How is it linked to energy?

The above outline is a basic introduction to entropy and, combined with the other pages on chemistrystudent.com on entropy changes, should be enough for most exam specifications.

The idea that entropy is simply a measure of disorder is perhaps a little misleading as it doesn’t give any indication of how it is connected to energy. Below is a slightly more detailed, but still A-level relevant, outline to help clarify the above.

The units for entropy are JK-1. This tells us that energy (Joules, J) and temperature (Kelvin, K) are involved!

At any temperature above 0 Kelvin (absolute zero), particles have thermal energy. As particles hit each other, they exchange this energy with other particles. This means the energy ‘spreads’ out throughout the system. As it spreads out, it becomes less and less useful, until eventually it can’t really be used for anything. By less ‘useful’ we mean that it is unable to ‘do’ any work (unlike thermal energy, for example, which is able to be transferred between particles and trigger reactions).

This means the ‘useless’ energy can’t be measured in the same way thermal energy can, but we know it exists because energy cannot be created or destroyed. The total energy of a system must always have the same amount of energy within it.

Entropy, in a very simplistic sense, is the ‘useless’ energy that cannot be used for anything useful. This is why entropy has Joules within its units – we are, in fact, measuring energy!

Entropy is like measuring the number of LOST coins in the world. It increases with the disorder of particles in the same way that the number of lost coins increases as people move around more.

Where does temperature fit with this?

At higher temperatures, particles move faster due to having more energy. Remember, it is through the movement of particles that energy is able to spread and get ‘distributed’ throughout a system. If the particles are moving faster, there are far more possible ways for the particles to bump into each other and transfer energy, meaning there are even more ways to distribute energy.

Because of this, at higher temperatures energy will get ‘spread’ out more than at lower temperatures, increasing the amount of ‘useful’ energy getting converted into ‘useless’ energy.

This is why entropy has temperature (Kelvin, K) in its units as it will always be linked to the temperature of a system.

The possible distributions of energy within a system have an impact on the system's stability (linked to energy, measured in Joules, J).

This is all still a simplistic view of, essentially, a mathematical concept. To go further at A-level would be of little benefit and only add to confusion. The idea that entropy changes with temperature is very important for A-level however, and forms the basis of entropy change calculations (see Entropy Changes).