It is incredibly difficult to determine lattice enthalpies experimentally. Separate samples of gaseous positive and negative ions would need to be kept apart, then carefully mixed and the released thermal energy measured.

For the following example, we will be referring to the formation of sodium chloride (NaCl).

There are two ways we can form the ionic lattice of sodium chloride (NaCl(s)) from its constituent elements.

The easiest way is to take the elements that make up sodium chloride (NaCl) in their standard states (Sodium - Na(s) and chlorine - Cl2(g)) and simply react them together. This is a straightforward reaction and the enthalpy change is easy to measure.

This process would be exothermic (energy would be released), meaning it would have a negative enthalpy change (-ΔH).

Another way to form the lattice would be to convert the sodium and chlorine into gaseous ions, then react these gaseous ions together to form the lattice, NaCl(s). This method would involve several steps as it is not possible to simply go from Na(s) + ½Cl2(g) → Na+(g) + Cl-(g) in one go! These steps can be linked together to form an energy cycle, as outlined in detail below. 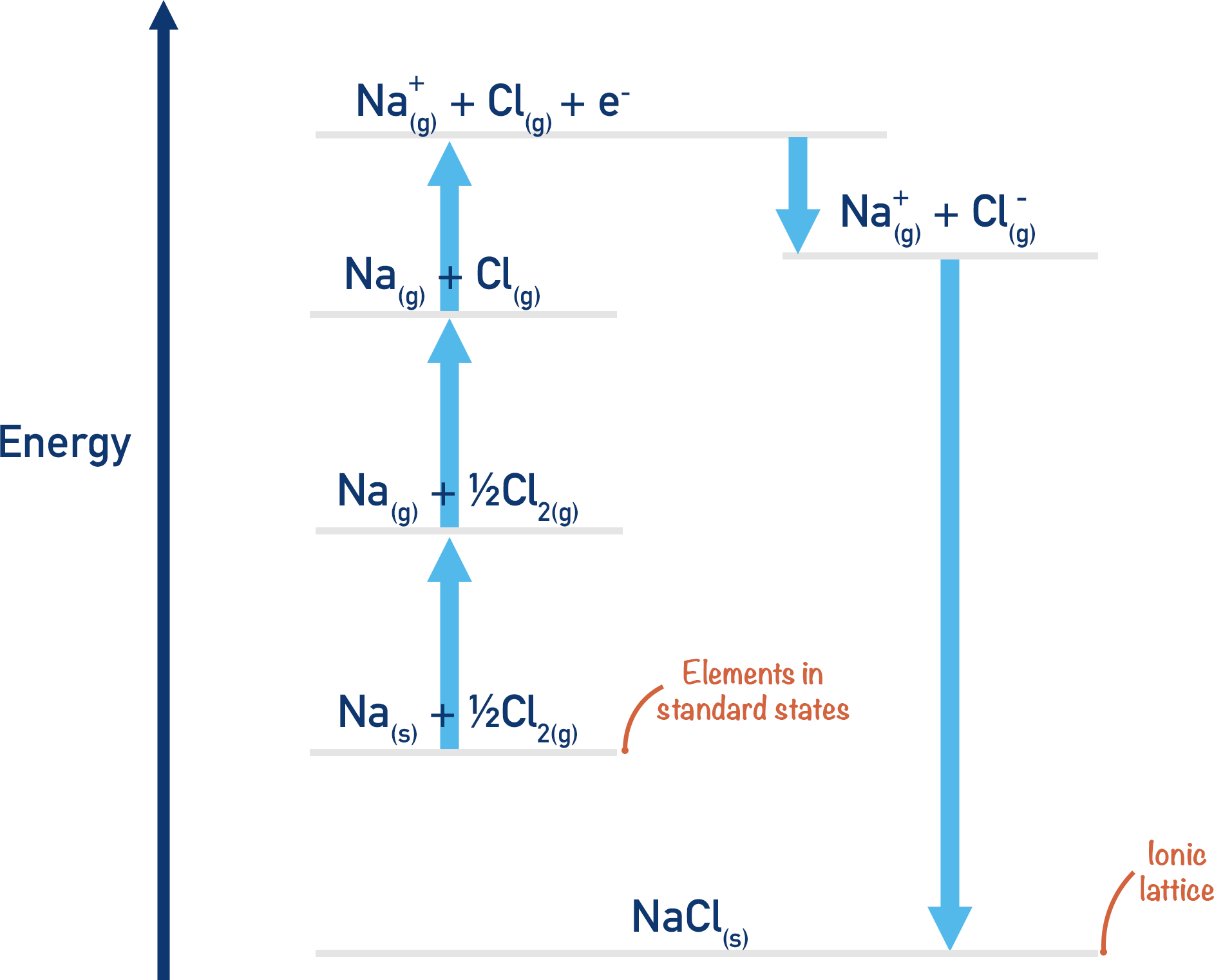 The Born-Haber cycle is a way of drawing out the two possible ways we can go from Na(s) + ½Cl2(g) to NaCl(s).

Firstly, both the sodium and the chlorine have to be ‘atomised’ and turned into single, free gaseous atoms. This means breaking apart their bonds to other atoms. For sodium, this would be overcoming the bonding in the metallic structure of solid sodium metal. For chlorine, this would be breaking the covalent bonds between chlorine atoms in chlorine molecules (Cl2).

We can measure the enthalpy change for the atomisation of both sodium and chlorine, but not at the same time. We have to break this stage down into two steps. 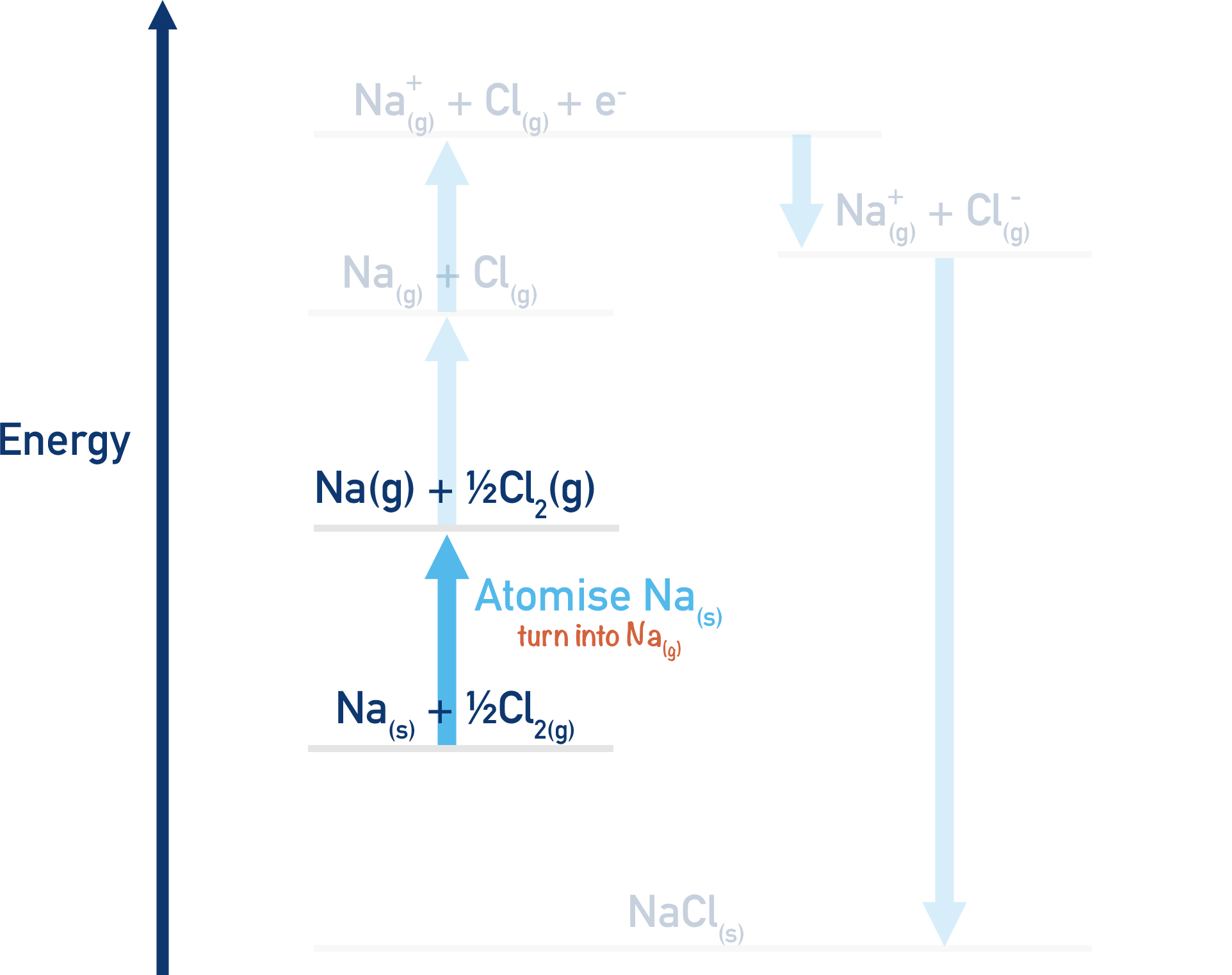 Here, we have atomised the sodium as it has gone from Na(s) to Na(g). Energy is needed for this process (endothermic), it will have a positive enthalpy change (+ΔH). 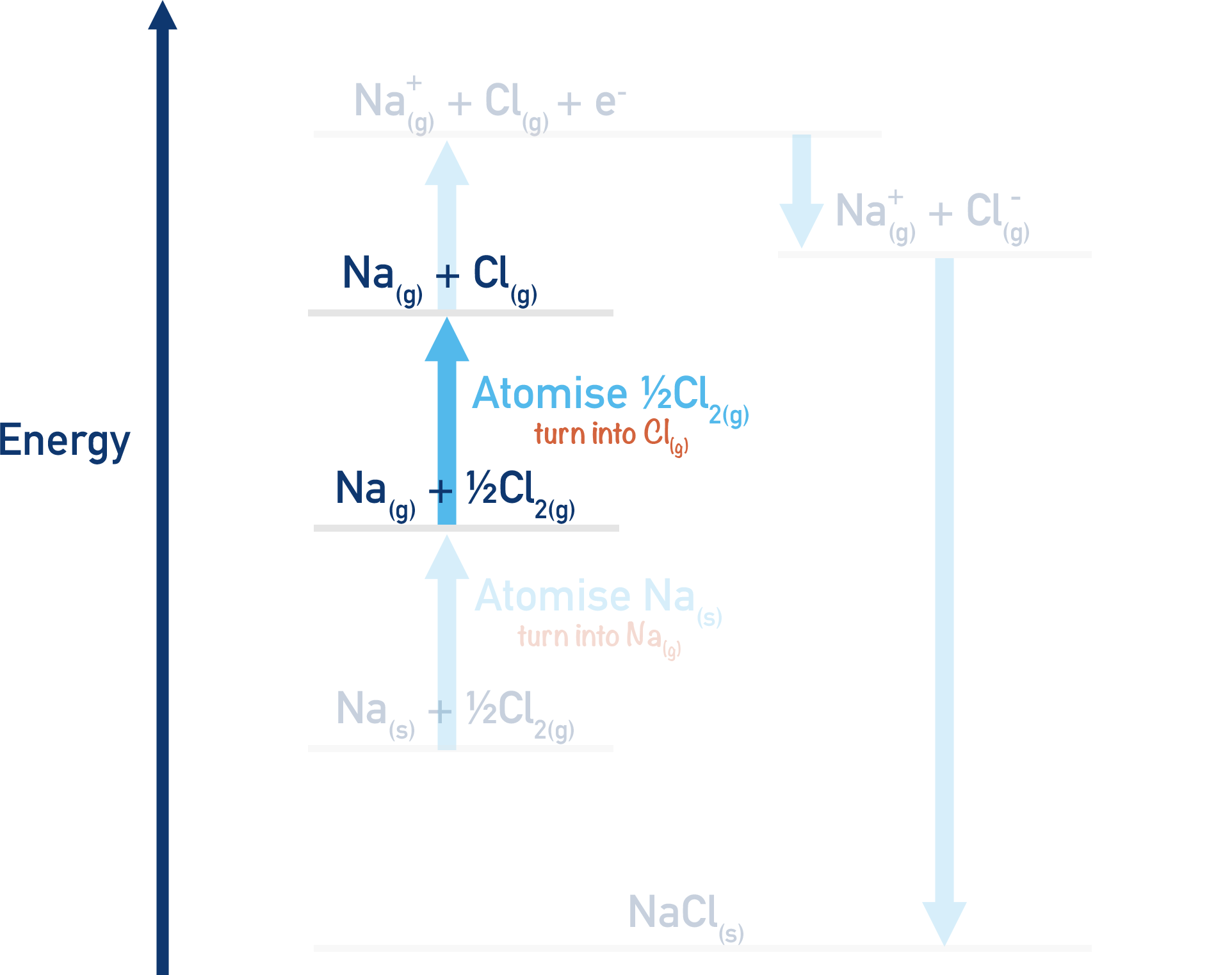 Here, we have atomised the chlorine as it has gone from ½Cl2(g) to Cl(g). Energy is needed for this process (endothermic), it will have a positive enthalpy change (+ΔH).

Now we have converted the Na(s) and ½Cl2(g) into gaseous atoms, the only remaining thing to do is convert them into charged ions. We have to measure the enthalpy changes for converting both atoms to ions independently. 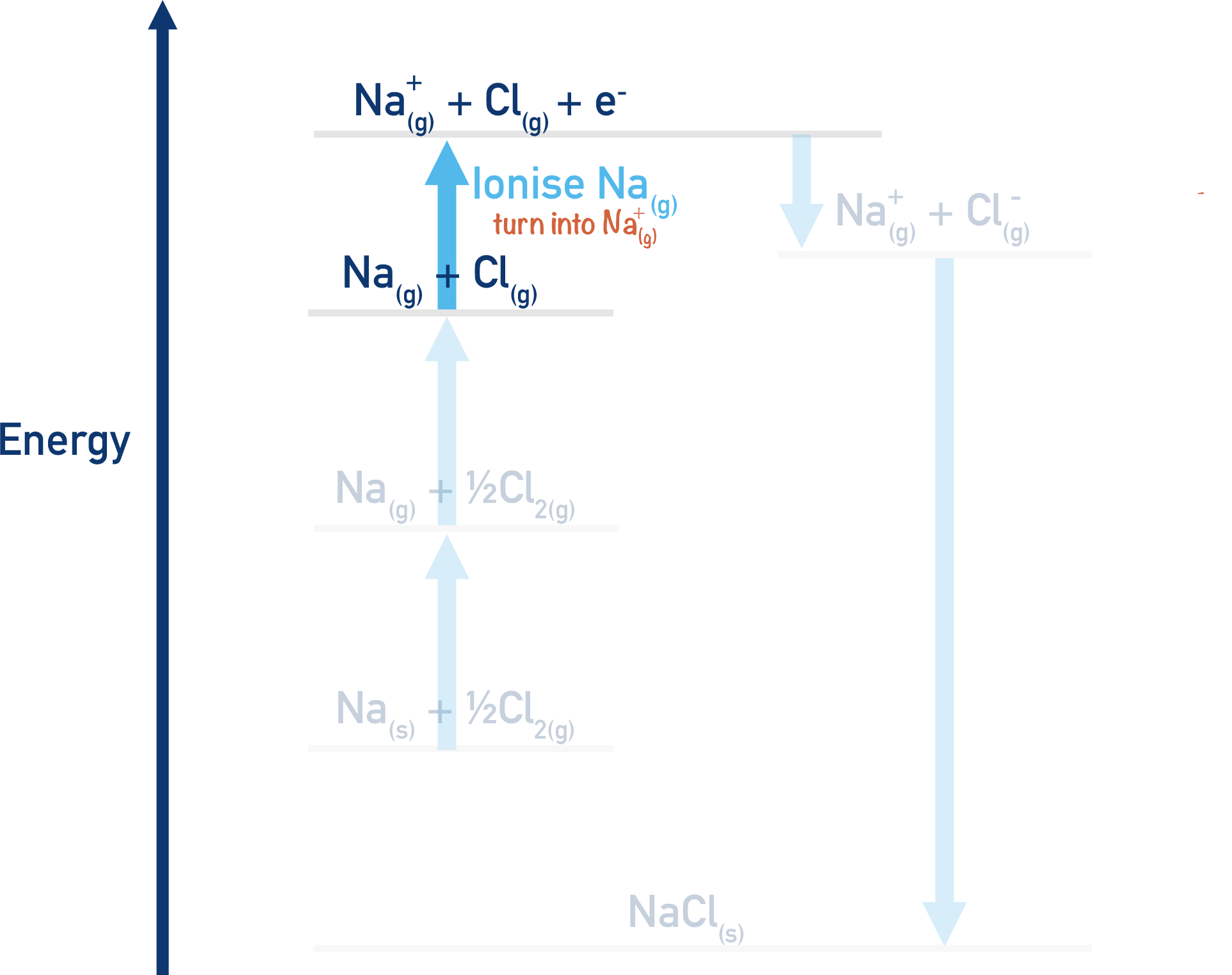 Here, the gaseous sodium atom has been converted into a positive ion by the removal of one electron. This is the same as the first ionisation energy of sodium (see Ionisation Energies). The e- on the right-hand side of the equation comes from the sodium atom. Energy is needed for this process (endothermic), it will have a positive enthalpy change (+ΔH). 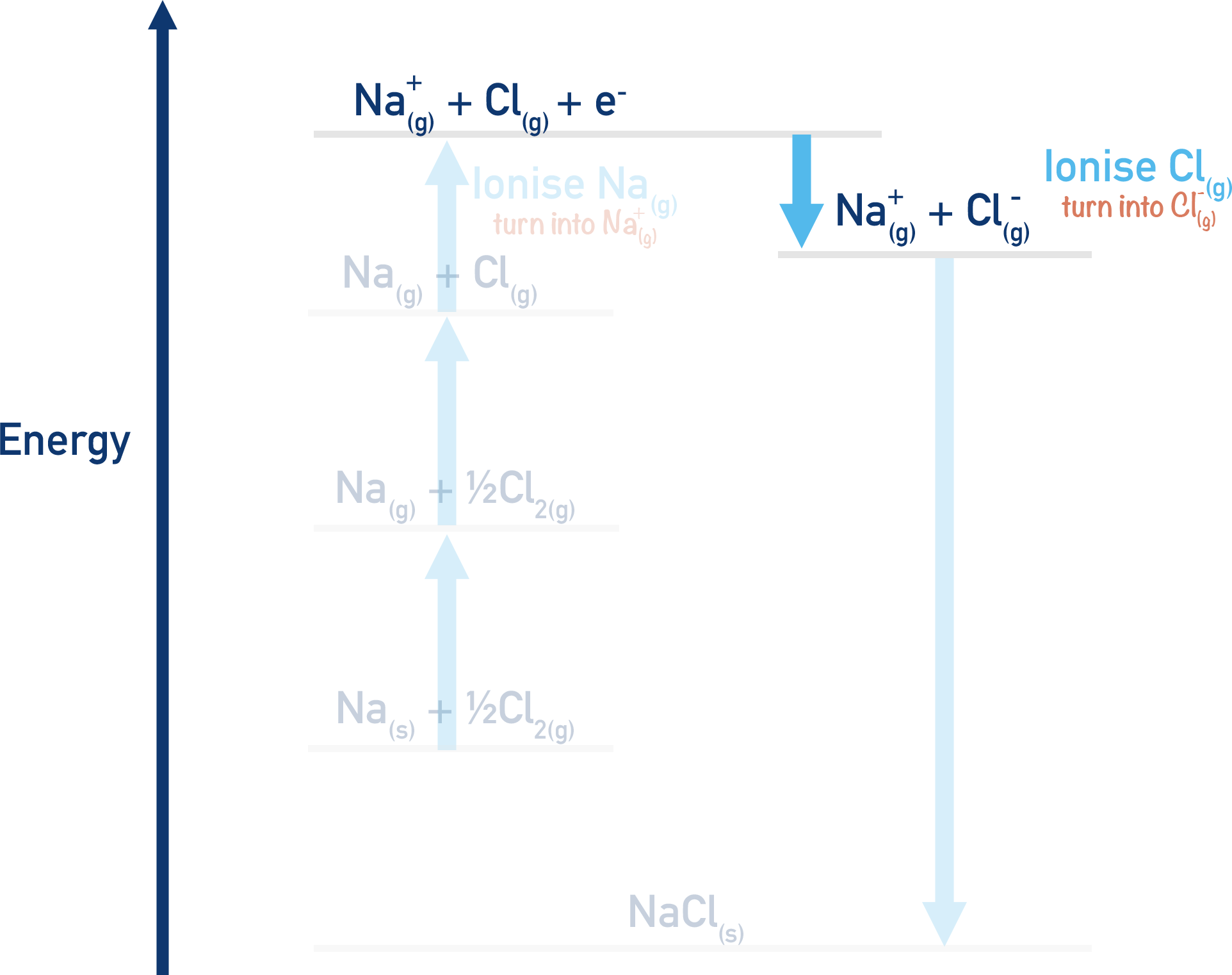 Here, the gaseous chlorine atom has been converted into a negative ion by the addition of one electron. This is referred to as ‘first electron affinity’. This process would actually release energy (exothermic) and have a negative enthalpy change (-ΔH). This is because the chlorine atom would be far more stable as a negatively charged ion.

Now we have the species Na+(g) and Cl-(g). The final step in this process would be mixing these two together to form the ionic lattice NaCl(s). 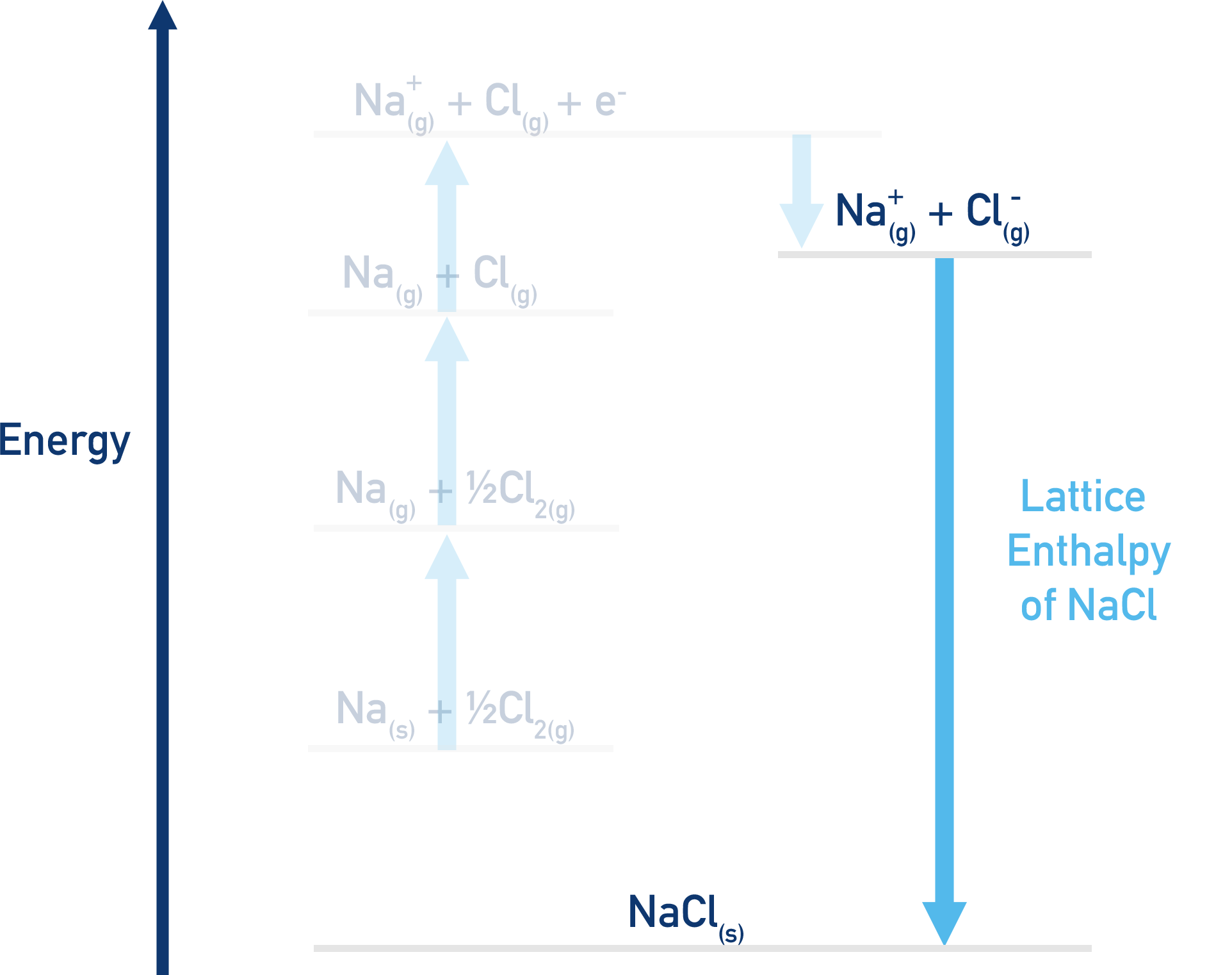 The enthalpy change for this part of the process is virtually impossible to measure experimentally, although we know the enthalpy change would be negative (see Lattice Enthalpies). This is where the Hess Cycle comes in.

We have outlined two possible routes above to go from Na(s) + ½Cl2(g) to NaCl(s) and have a complete cycle. 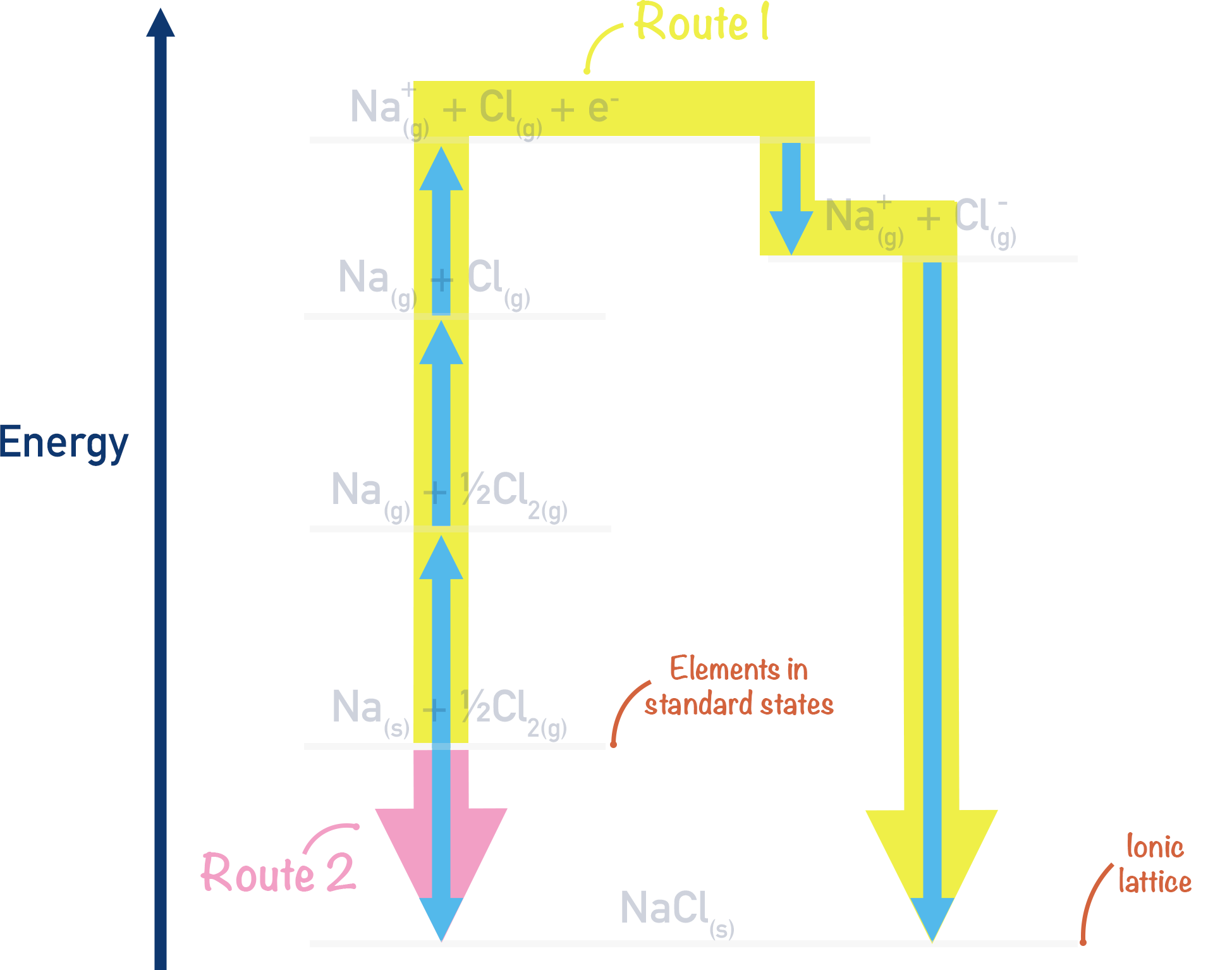 By putting ‘actual’ values in for each stage in the two routes, we can find the lattice enthalpy of NaCl using Hess Law.

The values used are ‘standard enthalpy’ changes (see bottom of the page) and should be provided in an exam. They are ‘data book’ values, which have been found by carrying out each type of reaction under standard conditions (with molar quantities). By using these values, it is unnecessary to actually carry out the reactions in the Born-Haber cycle each time we want to find a lattice enthalpy! 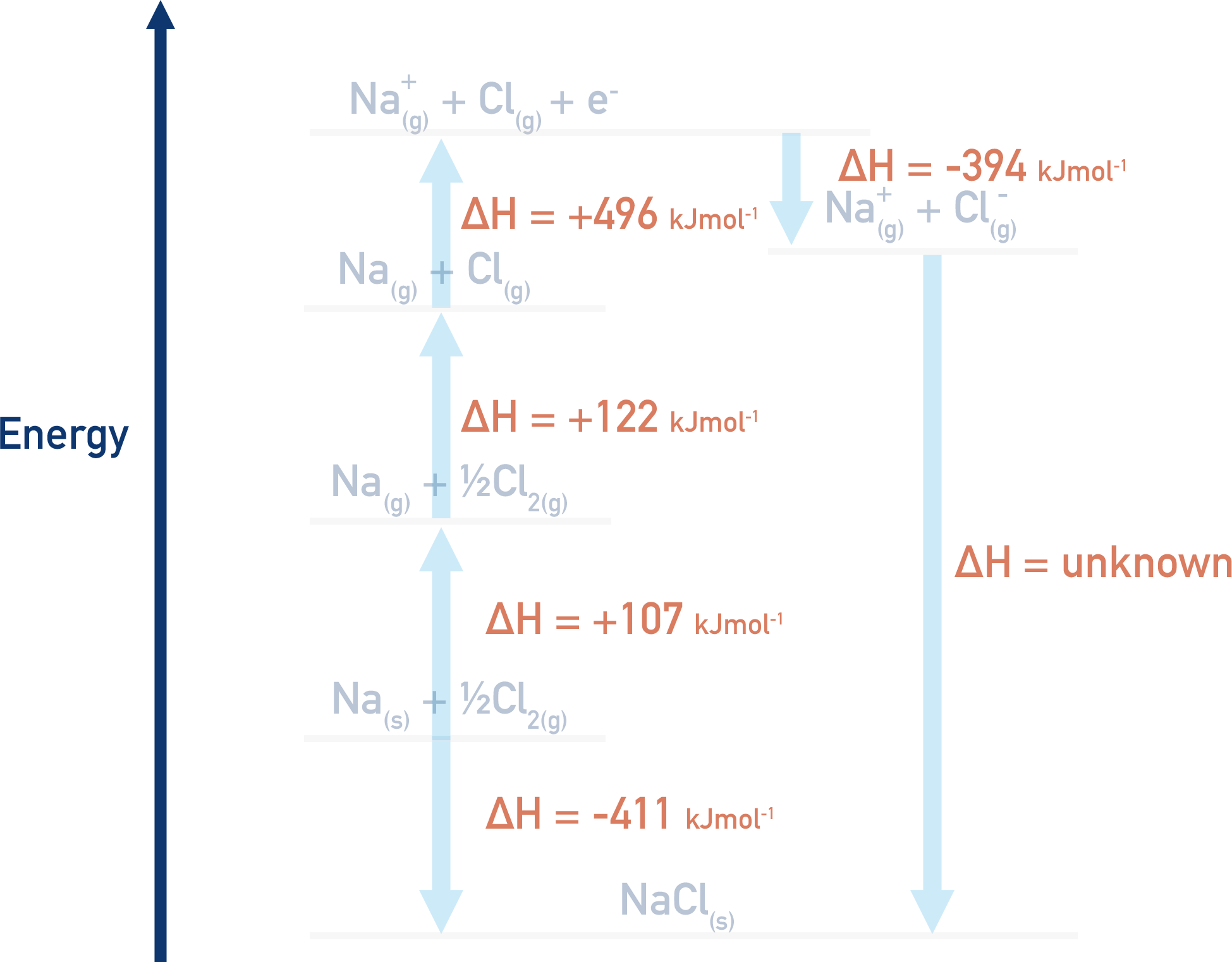 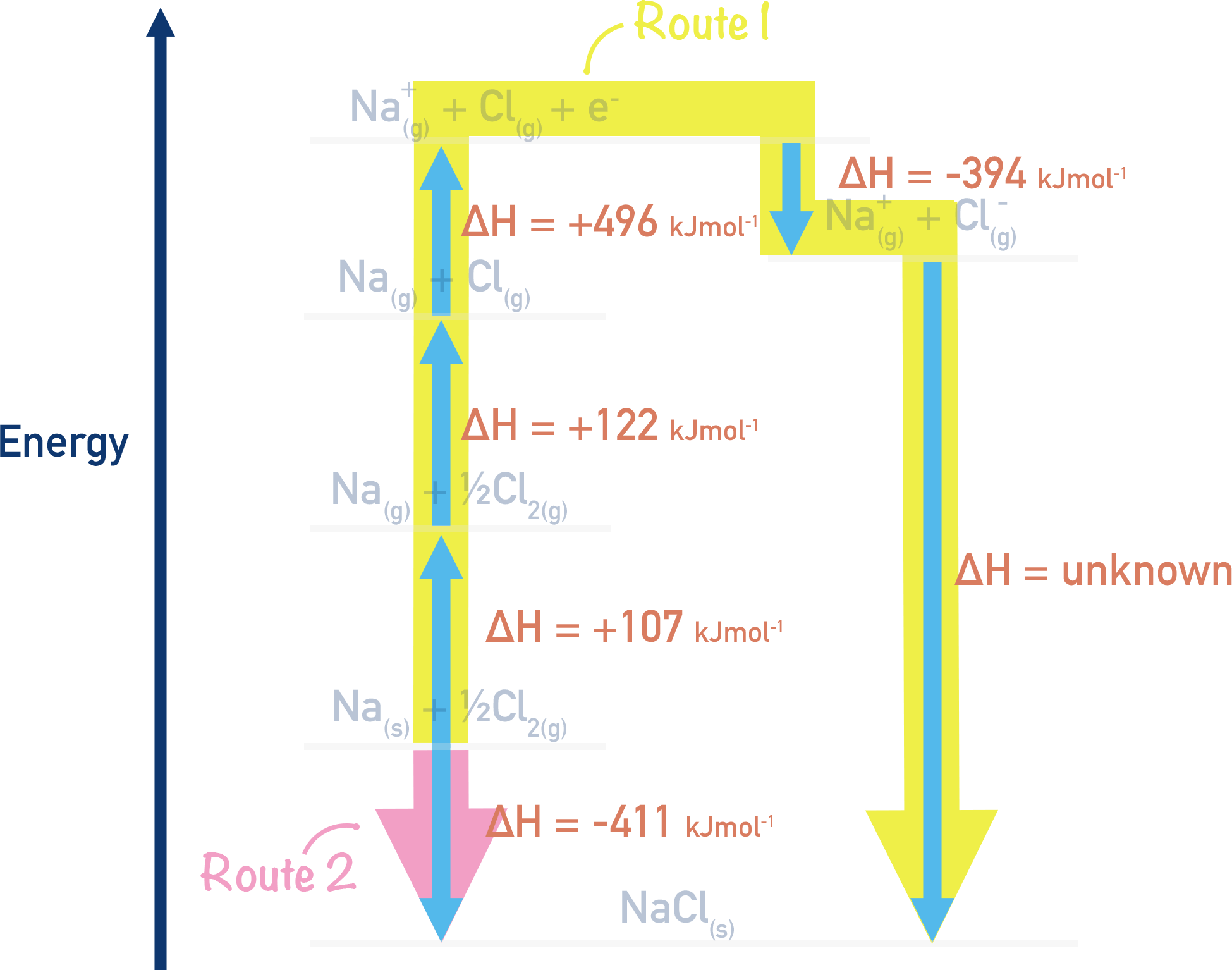 After the values are put into the cycle, we can follow Hess’ Law to find the value of lattice enthalpy. Remember route 1 = route 2 (see Hess Cycles).

All the + and – signs make things look complicated, but I strongly recommend you put the signs in brackets to make sure your enthalpy changes are correct! Otherwise, things can get very messy. You may be taught to ‘reverse the sign’ of an enthalpy change to go in a different direction in the cycle. This method will work, but, in my experience, it means there is a far greater chance of getting your final value wrong! By copying the values as given in a data table, you can simply follow your cycle. Put them in brackets though! This helps avoid addition errors with your calculator.

There are some ‘standard’ reactions involved in a Born-Haber cycle, exam boards required you to know these! Also, remember that standard enthalpy changes always refer to enthalpy change per mole.