NOTE – for simplification purposes we are ignoring isotopic masses here, these will be addressed later.

Using such small values for mass isn’t very practical. Instead, atoms are given ‘relative’ masses. Relative means ‘compared to something else’.

The ‘thing’ we compare the mass of an atom to is an atom of carbon-12. This makes carbon-12 the ‘standard’ for relative mass. Why carbon-12 is used is outlined at the bottom of this page.

The problem is ‘1/12’ isn’t an easy number or value to work with! To make things easier, we consider a proton and a neutron to each have an atomic mass unit of 1. Atomic mass unit (amu) is the unit used for finding relative atomic mass.

So, an atom of hydrogen (which contains only one proton and no neutrons in the nucleus) would have an atomic mass of 1.

It is very important to understand that an atomic mass unit of 1 is not an actual mass, just a number that gives a ‘point of comparison’ for masses. The idea being that the masses of each element in the periodic table can be compared to one another.

Of course, if necessary, we can easily convert atomic mass to actual mass by using the actual masses of protons and neutrons.

If the amu of each proton and neutron is 1, the mass of an atom can be determined. For example, helium has two neutrons and two protons, giving a mass of 4 amus (an atomic mass of 4). Again, this is compared to carbon-12, which has an atomic mass of 12, so it is referred to as ‘relative’ atomic mass.

Many elements have naturally occurring isotopes (atoms of the same element with a different number of neutrons). For this reason, weighted averages have to be used when assigning an element in the periodic table with a relative atomic mass.

So, when determining the relative atomic mass: ‘average’ because all isotopes in a sample must be accounted for; ‘weighted’ because the natural abundances of each isotope (how much of a pure sample of an element contains a particular isotope) must be taken into account.

One mole of carbon-12 has a mass of 12g. This is a measured value known to be correct from experiments.

To get the mass of one particle (proton or neutron):

This is now the molar mass of a proton or neutron as it is the mass (grams) of one moles’ worth. 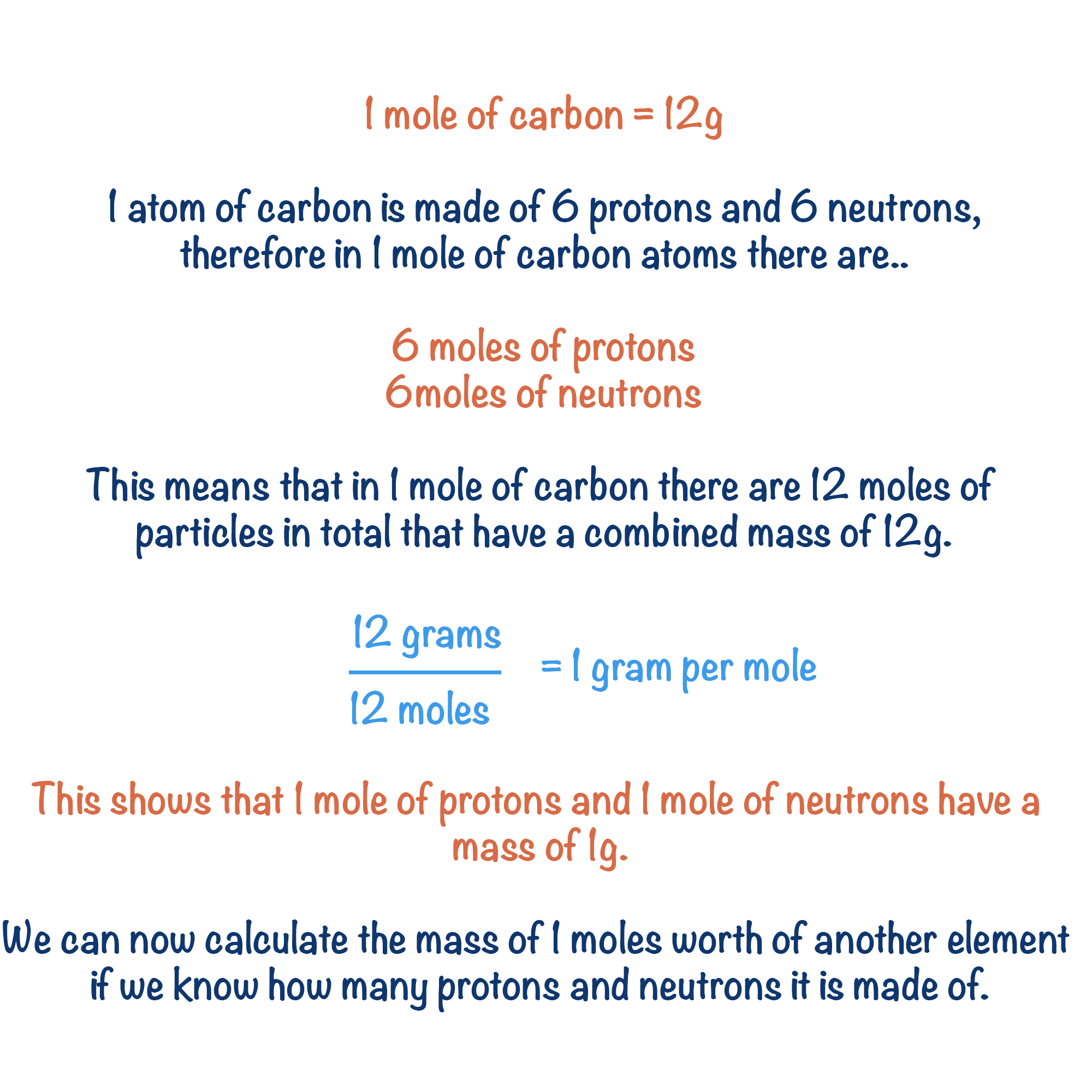 Why is carbon used as the standard for relative atomic mass?

It is considered to be a sensible choice as carbon-12 contains six protons and six neutrons. Other naturally occurring isotopes of carbon are also only present in very small amounts – meaning the vast majority of a sample of carbon will contain only carbon-12 atoms.

You may be wondering ‘does it matter which element we use as a standard?’. The truth is no – so long as the same element is used by everybody! In fact, up until the mid 20th century, oxygen was used as the standard for relative atomic mass. The problem was oxygen has isotopes that are more common than the isotopes of carbon and different scientists would use different measured masses of oxygen as the standard, meaning the relative atomic masses calculated were never completely accurate.

For the reasons given above, carbon was decided upon to be the ‘international standard’ for the atomic mass unit (amu).