The functional group of an acyl chloride contains a carbon with a double bond to an oxygen atom and a single bond to a chlorine atom. 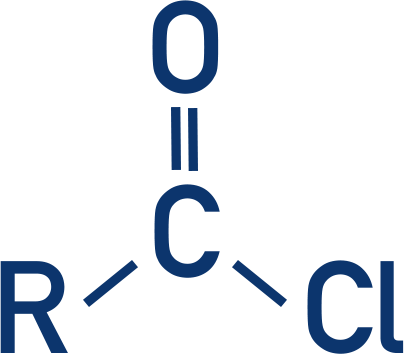 Although the group looks very similar to a carboxylic acid, acyl chlorides are much more reactive than carboxylic acids. Their high reactivity is caused by the high electronegativities of both the oxygen and the chlorine atoms bonded to the carbon.

The high reactivity of acyl chlorides makes them very useful compounds in organic chemistry reactions, but it does mean they are difficult to work with.

Acyl chlorides will react with water in a vigorous reaction, making them hard (and dangerous) to store. So, acyl chlorides are made when required in a reaction using a carboxylic acid and phosphorus pentachloride (other reactants can be used).

The preparation of acyl chlorides must be carried out in anhydrous conditions (without water present).

Acyl chlorides react with nucleophiles that have a hydrogen atom bonded to an atom with a lone pair of electrons. This is an example of a nucleophilic addition-elimination reaction, which occurs in a two-stage mechanism.

A nucleophile is attracted to the electron deficient carbon in the acyl chloride and donates electrons to it. This forms a bond between the carbon atom and the nucleophile. The atom that donated the electron pair now becomes positively charged. At the same time, the C=O double bond is forced to break, so the oxygen atom becomes a negative ion.

As a new group is being added to the carbon atom this part of the mechanism is described as addition.

Next, the oxygen ion reforms a double bond with the carbon atom and the carbon-chlorine bond breaks, releasing a chloride ion. The atom from the nucleophile, that now has a positive charge, breaks its bond with the hydrogen atom to become neutral. This releases a proton, which forms hydrogen chloride with the released chloride ion.

The overall mechanism is described as nucleophilic addition-elimination.

In this reaction, water is added and a carboxylic acid is formed (as well as HCl).

In this reaction, an ester is formed (as well as HCl)

In this reaction, a primary amide and ammonium chloride is formed.

The ammonium salt formation is due to the ammonia present reacting with the HCl produced in the reaction. Ammonia is a base, so it accepts the proton that is eliminated from the intermediate in the reaction, forming an ammonium ion, NH+4.

In this reaction, a secondary amide and an alkyl-ammonium chloride salt is formed.