An ester is made of two carbon chains joined by an ester link. Esters have sweet and fruity smells; they are commonly found naturally as fats and oils.

Esters can be made using a carboxylic acid and alcohol, in a process called esterification.

A carboxylic acid and an alcohol are mixed in the presence of an acid catalyst (usually concentrated sulfuric acid). Reflux conditions are required as energy is needed to start the reaction. Short chain alcohols and carboxylic acids have low boiling points, and when heated they would vaporise and leave the reaction mixture. Refluxing the mixture forces any vaporised compounds to condense and re-enter the reaction, enabling the reactants to react. When heating a concentrated acid, reflux should always be used anyway to stop gaseous acidic vapour being released.

Water is released in the reaction, making the esterification process a condensation reaction.

Note, in the actual mechanism for esterification, the oxygen from the alcohol does not get lost to form water, it is the oxygen from the hydroxyl group in the carboxylic acid that forms the water lost. For A-level students, it’s shown in this way to help with the naming of esters (see Naming of Esters).

An ester can be reacted with water to produce a carboxylic acid and an alcohol again. This process is called hydrolysis.

Hydrolysis refers to the splitting (-lysis) of a bond using water (hydro).

If an ester is hydrolysed in acidic conditions, a carboxylic acid and an alcohol will be formed.

If an ester is hydrolysed in alkaline conditions, a carboxylate ion and an alcohol will be formed.

Both reactions require aqueous conditions (water present) and are carried out under reflux.

Esters as Fats and Oils

Fats and oils are natural esters called triglycerides. Triglycerides are ester-based compounds made of a specific alcohol called glycerol and long hydrocarbon chains with a carboxylic acid group at one end. The carboxylic acids with long chains are called fatty acids. 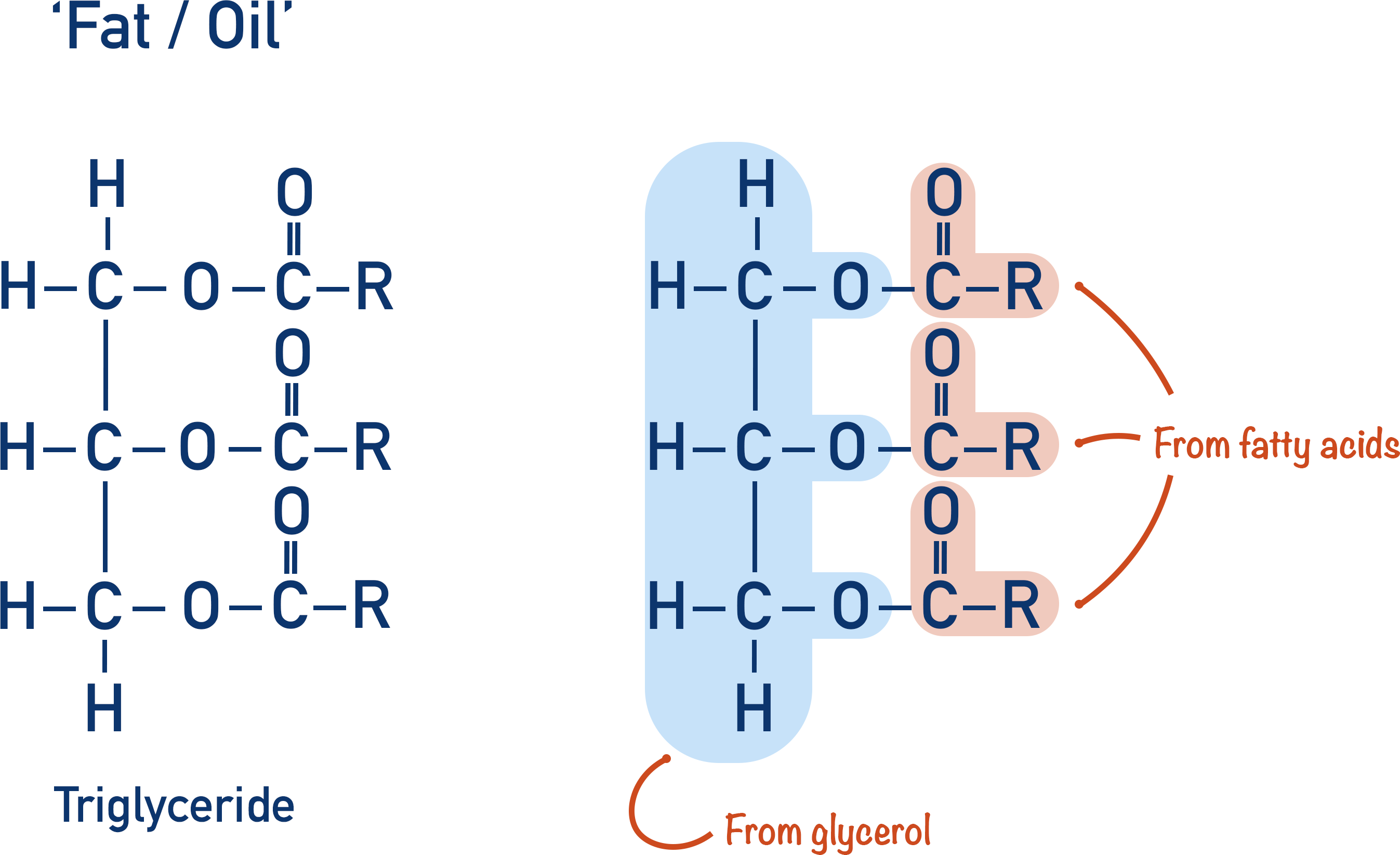 The glycerol (alcohol) is bonded to the fatty acids (carboxylic acids) with ester links, this is why fats and oils are described as esters.

In animal digestive systems, fats and oils (called lipids in biochemistry) are broken down by enzymes called lipases into glycerol and fatty acids. Fats and oils can also be broken down in the laboratory in simple hydrolysis reactions (as you would normally use to split any ester).

Fatty acids are used to make soap, but it’s the carboxylate salt of the fatty acid that is required.

How does soap work?

The purpose of soap is to enable insoluble substances to be carried in water and ‘washed’ away from a surface.

Grease-based substances are non-polar and do not dissolve in water, which is why trying to wash grease off a surface using water does not work. The grease is unable to move because it does not dissolve in the water, so it stays stuck to the surface. The role of soap is to enable this grease to become mobile in the water, meaning it can be moved away from the surface.

The hydrophobic chains of the soap molecules can dissolve the grease, while the hydrophilic ends of the molecules enable the molecules (and grease) to be mobile in water.

Salts of fatty acids are perfect for this role as they have a long non-polar chain (hydrophobic) and a highly polar end (carboxylate group).