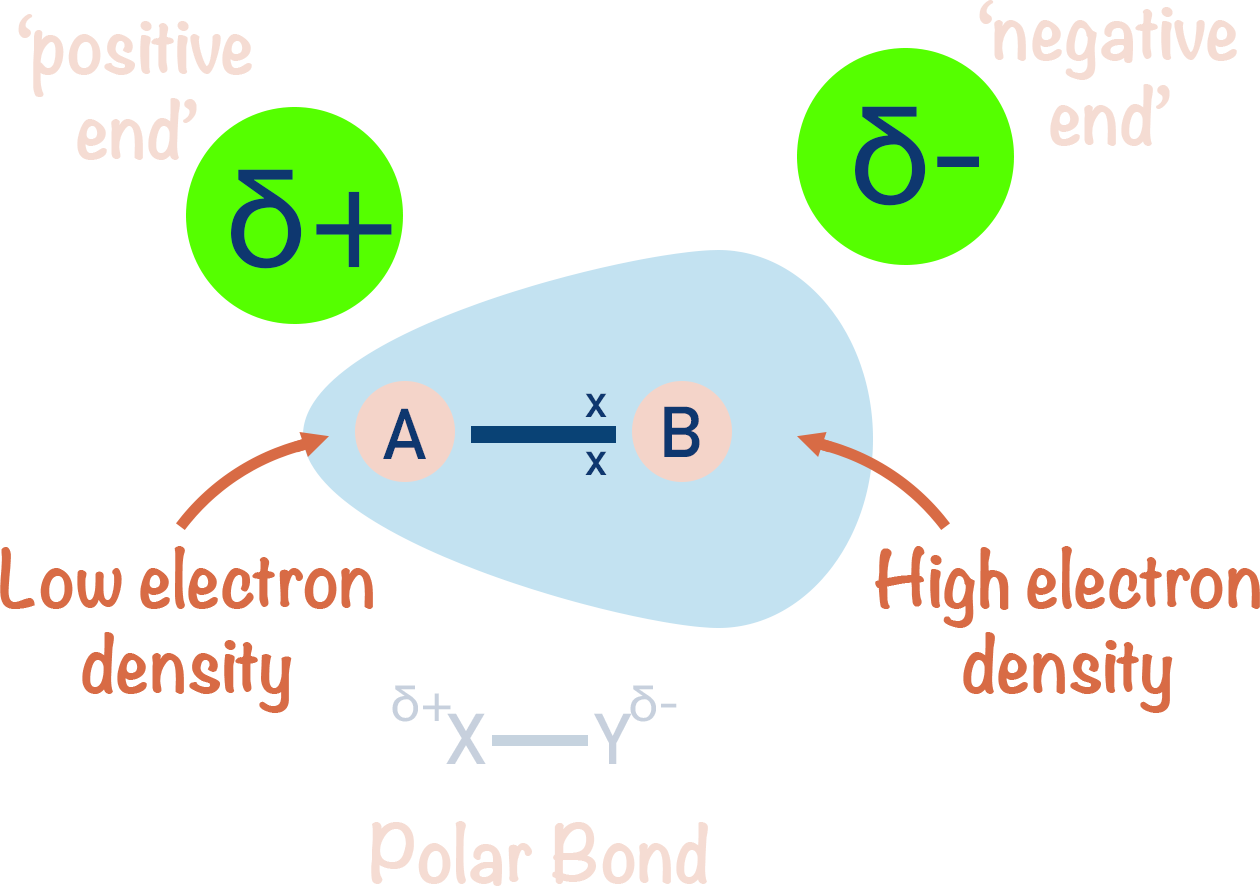 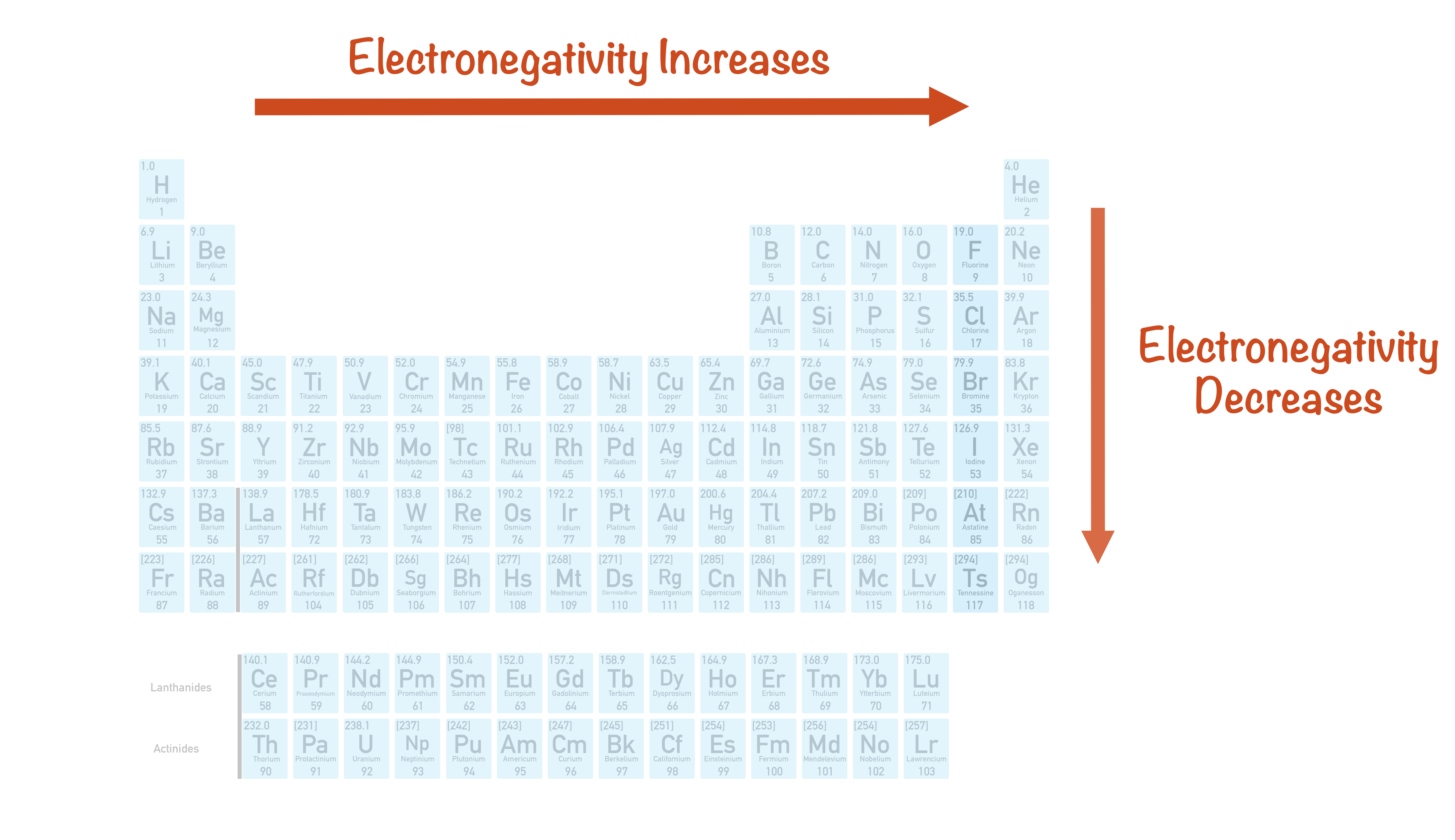 Covalent bonds form when two atoms share a pair of electrons and the shared electrons are attracted to the nuclei of both the bonding atoms.

If two identical atoms are covalently bonded together, the shared electron pair will be equally attracted to the nucleus of each atom. This means the electron pair is 'equally distributed' between the two atoms. 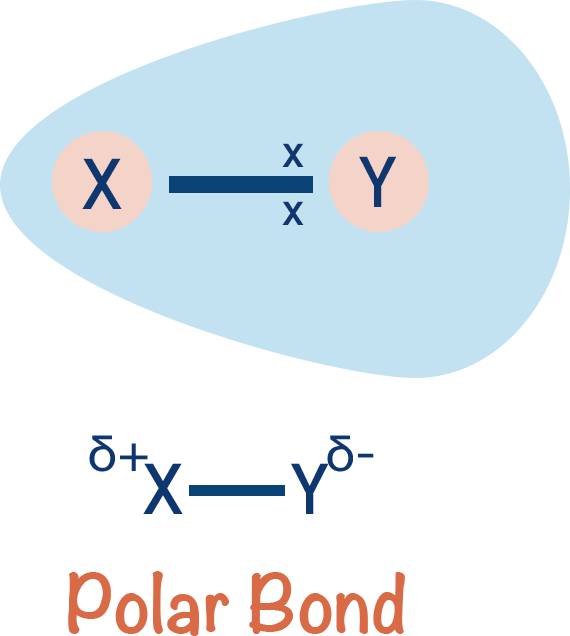 How much an atom is able to 'pull' the electron pair in a bond towards itself is referred to as its electronegativity.

What determines an atoms electronegativity?

The electronegativity of an atom is based on the strength of attraction between a shared pair of electrons (negative charge) in a covalent bond and its nucleus (positive charge).

The strength of attraction between the two is determined by both the size of positive charge from the nucleus (number of protons) and the distance between the bonding electrons and the nucleus.

Atoms with a large nuclear charge (number of protons) and a small atomic radius will have a higher electronegativity than an atom with the same nuclear charge but a larger atomic radius. This is because the strength of attraction increases as the distance between the two charges decreases. 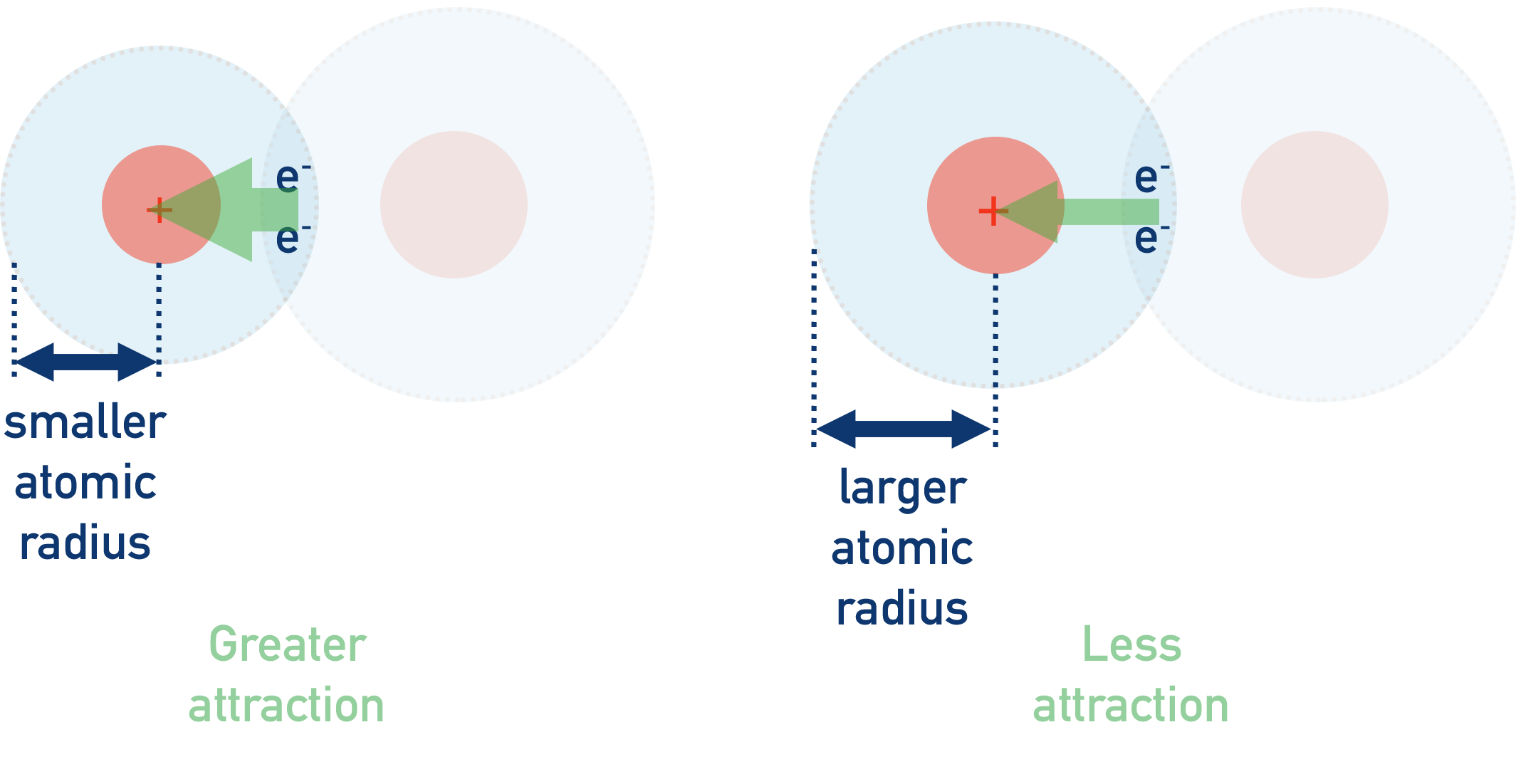 Equally, an atom with the same atomic radius as another but with a larger nuclear charge will have a higher electronegativity. This is because strength of attraction increases with the amount of charge.

How do polar bonds form?

Electronegativity is relative. This means that we can only ever compare the electronegativities of different elements, rather than think about an element by itself.

It's a bit like comparing two peoples strength - you can only consider how strong one person is compared to another.

If two identical atoms covalently bond together, they will equally attract the electrons in the bond (same electronegativity). This means the electrons won't end up moving closer to one the atoms compared to the other and the bond is considered non-polar. Like two people pulling on a rope in opposite directions - if they are both equally strong, the rope wont actually move. Each person is 'cancelling out' the force from the other person. 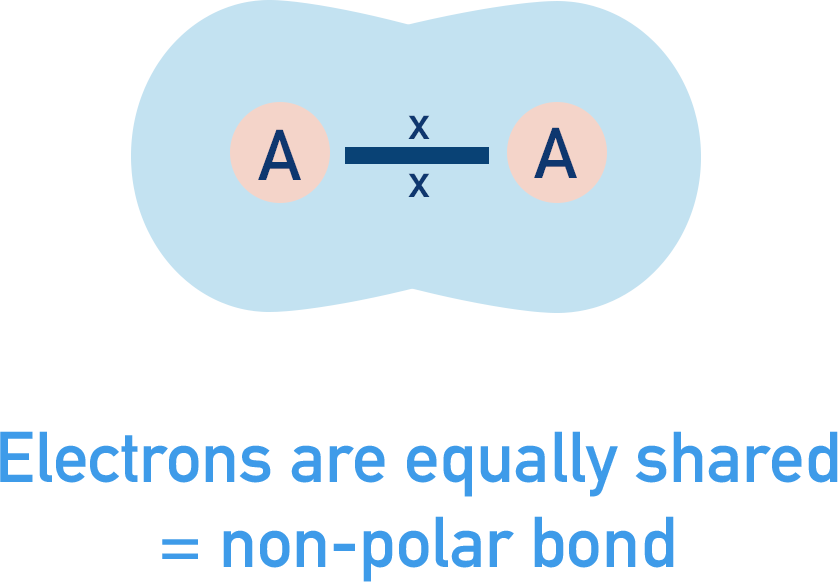 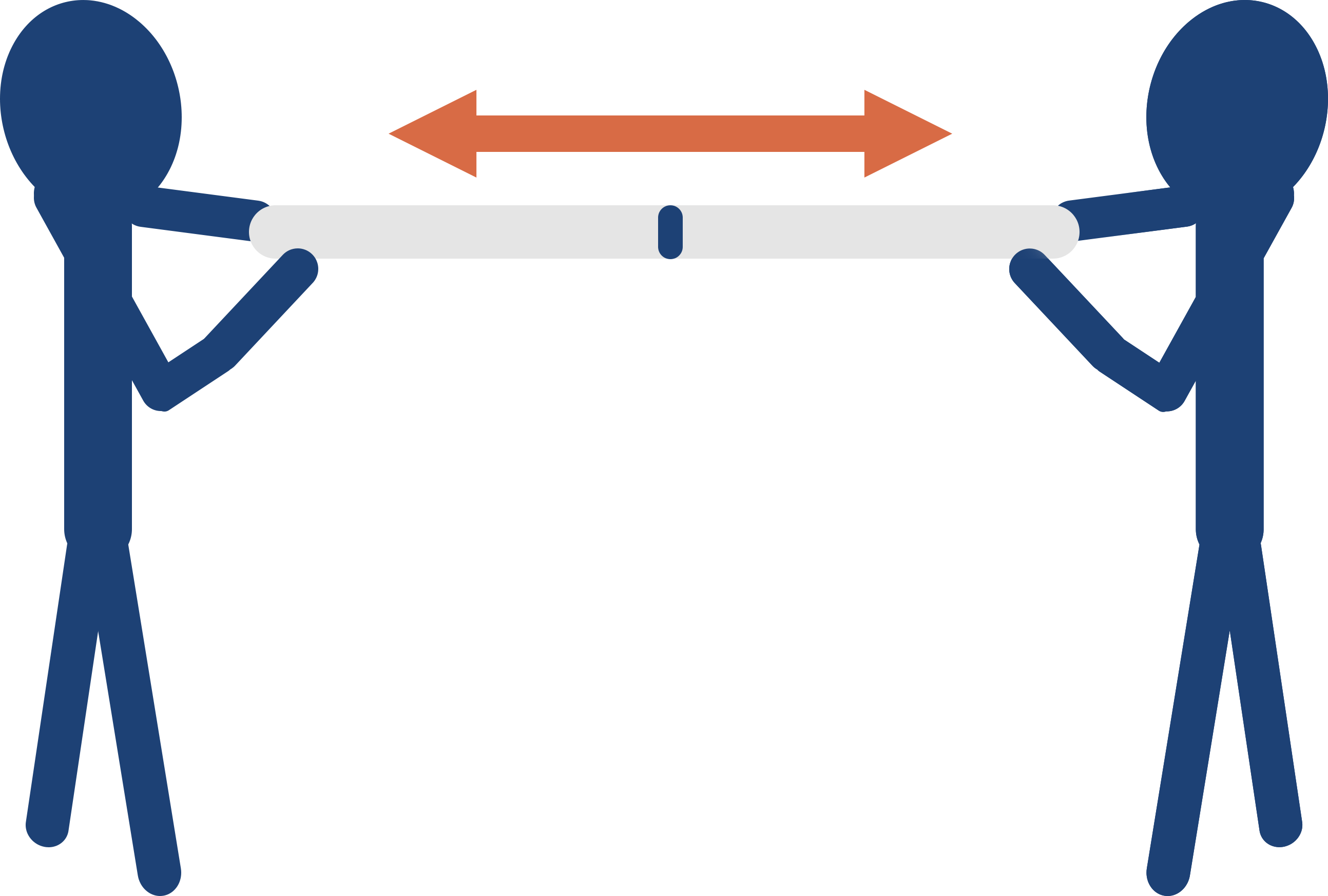 When two atoms with different electronegativities bond together, however, the atom with the higher electronegativity will pull the electrons towards itself with more force than the other atom can. Just like with two people pulling on a rope - the rope will move towards the person who is able to pull it with the most force. 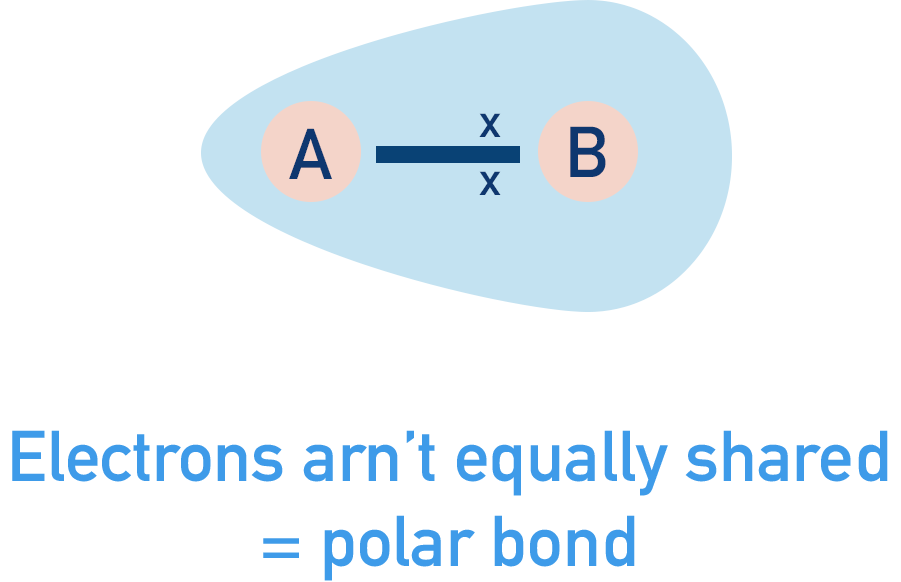 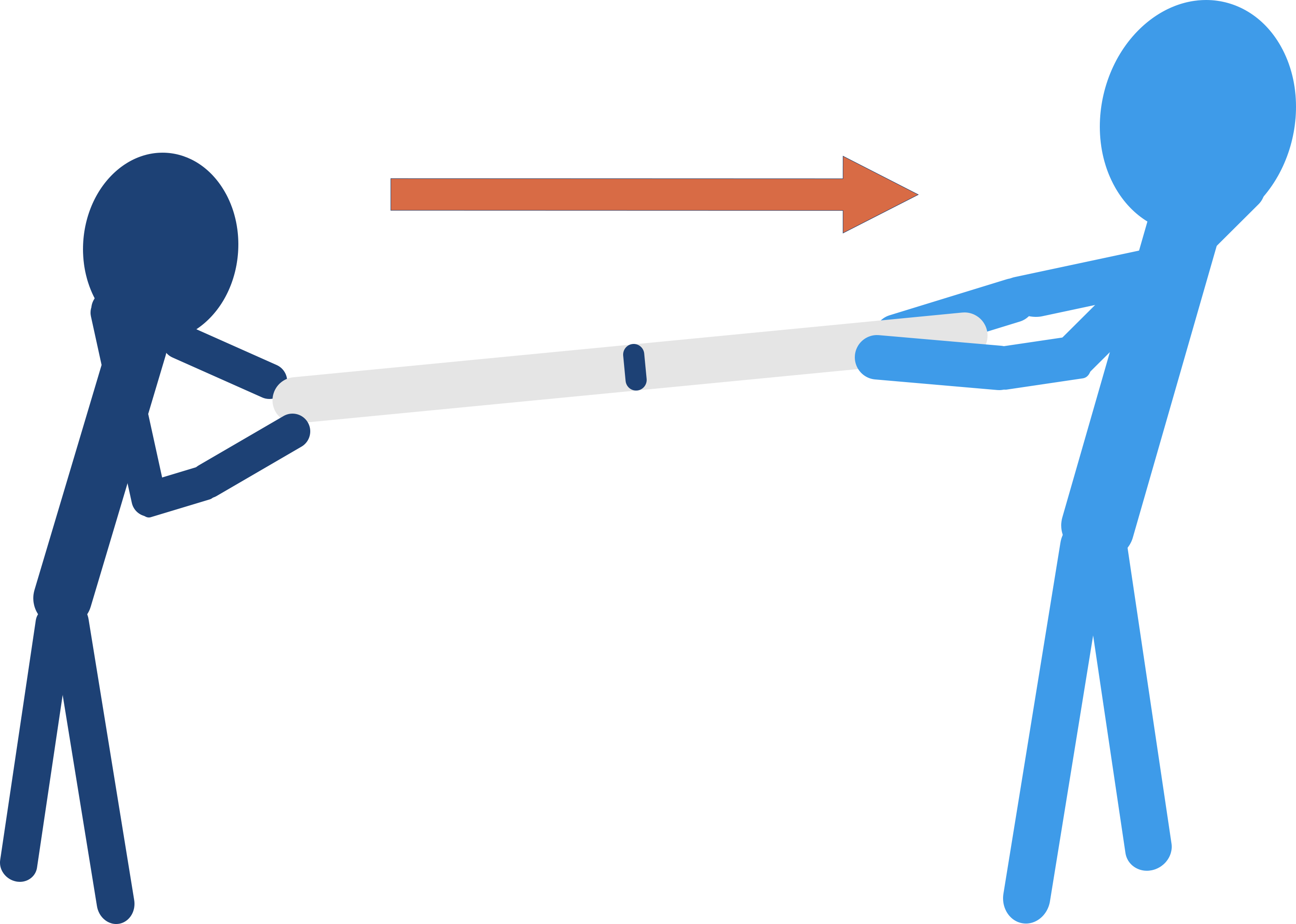 The other atom in the bond will end up with less of the negative charge from the shared electrons and will have a partial positive charge as a result (δ+).

It is important to understand that it is only the difference in electronegativity between the two bonding atoms that is relevant here. A highly electronegative atom bonded to another highly electronegative atom will end up giving a bond with very low polarity as each atom will pull strongly on the electrons and effectively will cancel each other out. Just like two very strong people pulling on a rope - it doesn't matter how strong they are it is only how strong they are compared to the other person. If they are both strong, the rope won't really move. 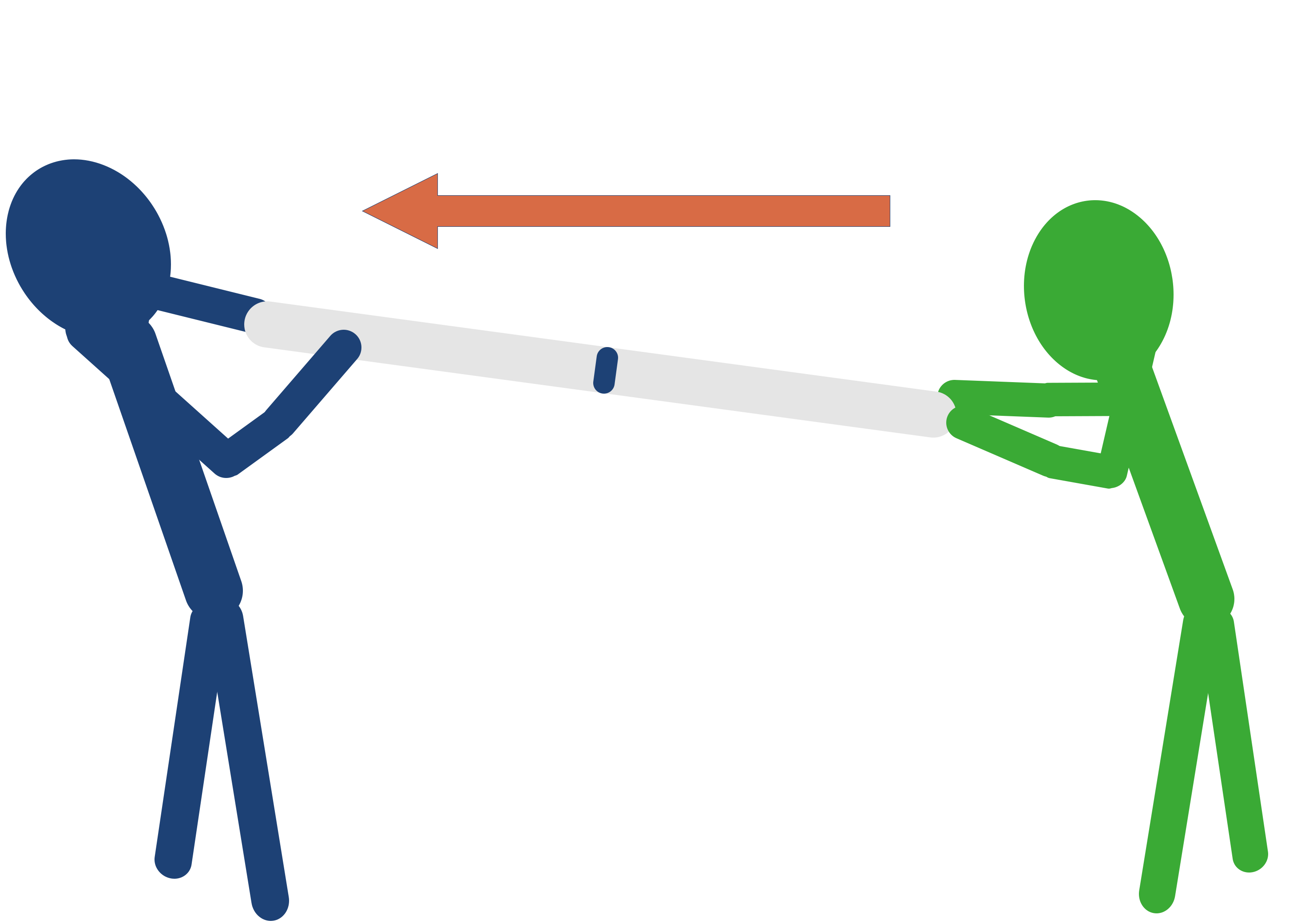 Equally, if a 'strong' person ends up against an even stronger person, they will still have the rope pulled away from them.

Electronegativity increases across a period and decreases down a group in the periodic table.

We've already seen that the electronegativity of an atom can be determined by its size (atomic radius) and nuclear charge (number of protons or 'atomic number').

As you go across a period in the periodic table, atomic radius decreases and nuclear charge (atomic number) increases. See Atomic Radii for more information and to link this to inner electron shielding. 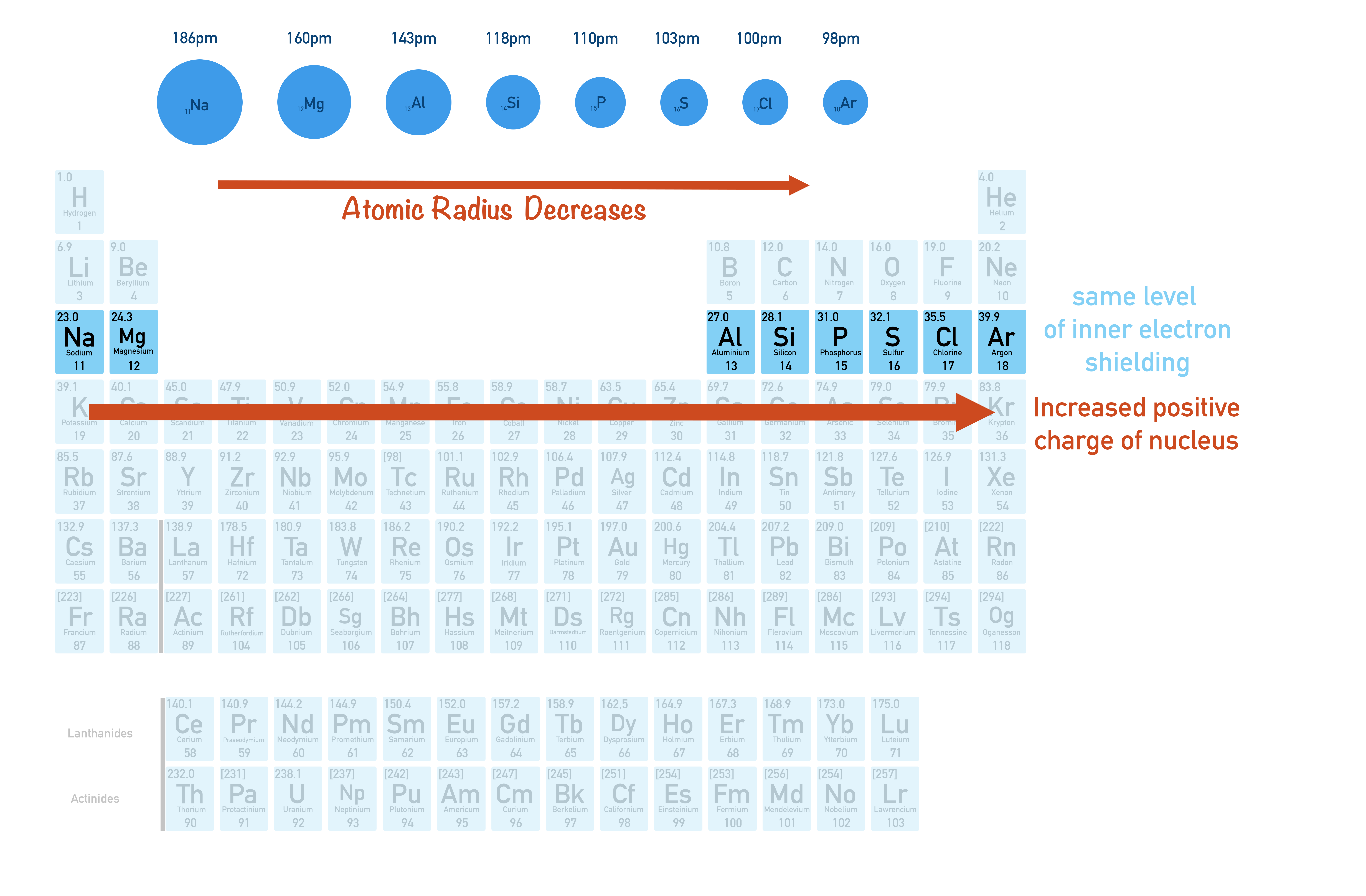 As you go down a group in the periodic table, atomic radius increases and, although the nuclear charge also increases, the increased level of inner electron shielding means the positive charge from the nucleus gets felt less strongly at the atoms surface. This means the atom is less able to attract a bonded pair of electrons towards itself and electronegativity decreases down a group as a result. 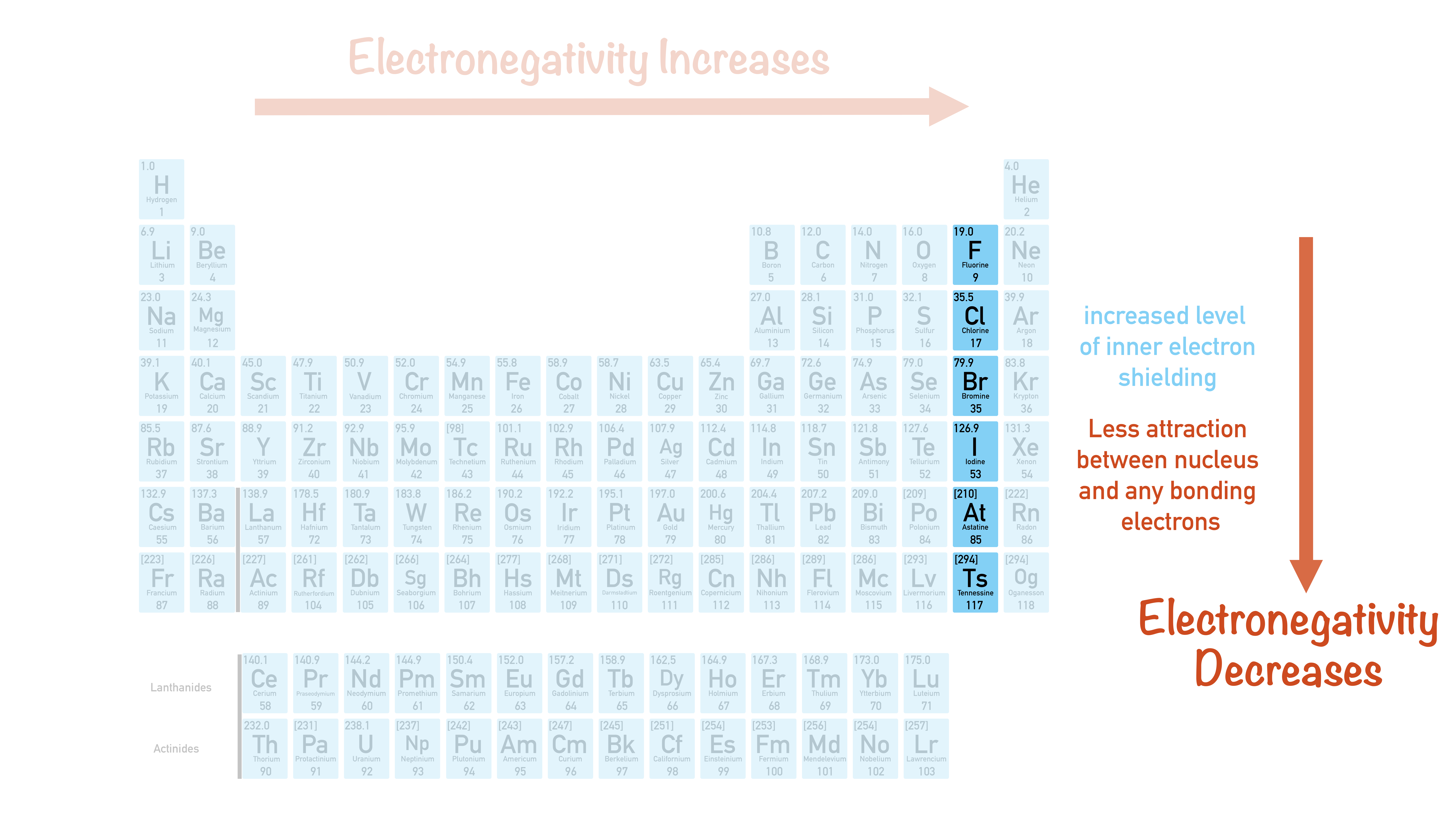 The polarity of a bond can be determined by using the Pauling values for the two bonded atoms - a large difference in electronegativity means a polar bond. For example, Hydrogen has a Pauling value of 2.20 and Chlorine 3.16. This gives a difference of 0.96 - giving a very polar bond. The difference between hydrogen and carbon is much smaller (0.35) meaning the bond is considered non-polar.

Highly polar bonds can end up with ionic character and if the difference in the electronegativities of two bonded atoms is high enough (over 2.20 based on the Pauling scale) the bond becomes ionic. See Covalent and Ionic Character.